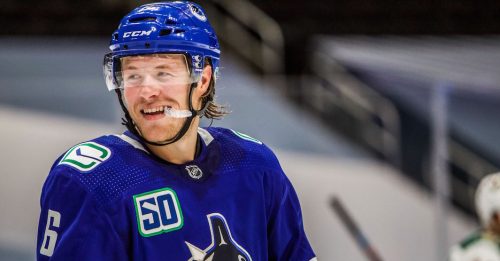 Welcome Matt: Boeser extension a win-win for the Canucks and their sniper

There was a narrow needle to thread between the Vancouver Canucks and Brock Boeser over a contract extension, so give both sides credit for getting a deal done.

There are give-and-takes for both parties, which is usually the mark of a good deal.

Boeser was expected to make $15 million over the next two seasons, so his motivation to make an extension was always tied to his desire to stay in Vancouver and his fans must be delighted that he put his money where his mouth was.

At $6.65 million a year, it’s entirely possible that Boeser could be overpaid this coming season, or in each of the next two seasons, but be underpaid this past year. That’s because the right-winger sold his first year as an unrestricted free agent for just under $5 million considering the total deal value ($19.95 million) and what that it was already guaranteed in these next two seasons.

Now, from the Canucks’ perspective, ideally you’d hope to buy more than one UFA season, but that negotiation was always going to be difficult given the structure of his previous deal and that $7.5 million guaranteed qualifying offer. dollars.

And it also represents another victory for the Rutherford/Allvin regime. The biggest decision to date was successfully courting Russian free agent Andrey Kuzmenko, which inspires confidence that this management team could make this deal given what lies ahead for guys like Bo Horvat and Elias Pettersson, not to mention a JT Miller swap that they must be right.

There is some risk in this deal for the Canucks. As much as Boeser played last year through the anguish of a sick father at home, he hasn’t built on his strong 2020-21 season.

It’s the second time in his career where you thought he was ready to take off (like after his rookie season) but didn’t quite reach the heights Canucks fans were hoping for.

Injuries have been a problem and his pace needs to improve (or hockey IQ needs to make up for a lack of speed) in an increasingly fast-paced NHL.

Finally, this new deal makes Boeser more negotiable given that an acquisition team now knows how responsible they would be for a given deal. I don’t suspect the Canucks will move Boeser after all of this, but Rutherford/Allvin intend to change the culture, so nothing should come as a surprise in this offseason of change.