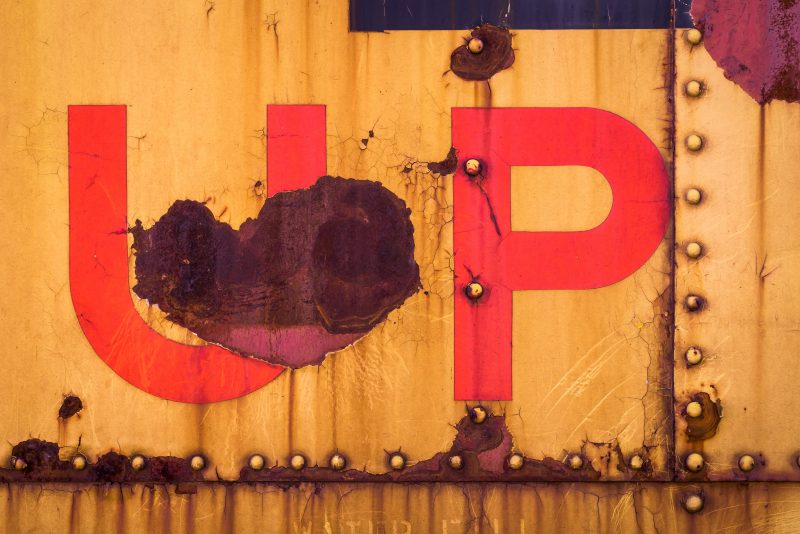 The number of UK businesses threatened with bankruptcy has more than halved in the past six months, with just 6% of all registered businesses saying they are at risk – the lowest since September 2020. However, Pierre Lambert, Apolline Marion, and John Van Reenen write that the withdrawal of government support, possible new variants and the ever-present risk of localized spikes in infections could make the rest of 2021 a fairly volatile time.

In the six months leading up to July 2021, we saw a significant improvement in business confidence across the UK in the Office of National Statistics COVID-19 Business Impact Survey (BICS) (ONS). The number of businesses that reported being at risk of bankruptcy in July was less than half that of January 2021. The drop is mainly due to improved prospects for small businesses (those with less than 50 employees). The improvement is cause for cautious optimism, although we also find that companies are still sensitive to possible disruptions due to new variants or rapid changes in policy.

To study business confidence, we focus on the issue of BICS which is collected approximately every two weeks. He asks, “How confident is your business that it will survive over the next three months?” We classify the proportion of businesses that respond with “low” or “no” chance of survival as being at risk of permanently closing.

Figure 1 shows the evolution of the proportion of companies at risk since the start of the BICS survey. The peak in the proportion of at-risk businesses comes from data collected from late December 2020 to early January 2021. That peak coincided with a largely unanticipated foreclosure imposed weeks before Christmas. Since that peak, there has been a steady decline in the expected exit rate.

Chart 1. Percentage of businesses at risk of disappearing in the next three months

Note: Data is from BICS. Our measure of “at risk” companies is defined as those companies responding that they had “little confidence” or “no confidence” to the question “How confident is your company that it will survive over the course of the period. the next three months? “. The BICS survey samples around 10,000 companies every two weeks. We take the close date of the survey sample window as the date. This question was included in the survey from wave 14 (September 21, 2020 – October 4, 2020) to the most recent wave 35 (March 22, 2021 – July 29, 2021), excluding waves 15, 34 and 35 , where this question was not asked. The responses are weighted according to the size of the company in order to make them representative. This weighting is done on the basis of the distribution of the employment size of enterprises from the Interdepartmental Enterprise Register – which is also the sampling frame for BICS. Key dates come from a variety of sources, listed at the end of this article.

The question of the survey we are studying has been asked since mid-October 2020, with the first results published in September 2020. We started reporting this data in January 2021. At that time, things looked very bleak: more than 15% of businesses (one in seven) were on the verge of collapse, covering more than 2.5 million jobs. Our follow-up piece in April 2021 showed a slight improvement when nearly 12% of businesses (one in eight), or 1.9 million jobs, were at risk of being destroyed due to COVID-19.

The latest results show that 6.3% of companies (one in 16) are at risk of going bankrupt, covering just over a million jobs. This is the lowest level since the start of the BICS survey, which started collecting data in September 2020. (The number of jobs covered by this fraction of companies is based on the latest estimates from the business population, as of January 2020. For an overview of the methodology applied, see Annex A of our previous report.)

Figure 2 below shows that the most significant improvement in confidence came from micro-enterprises (0-9 employees) and small businesses (10-49 employees). These are also the groups hardest hit at the start of the pandemic, so it’s encouraging that they reacted most strongly to the improving business landscape.

Figure 2. Proportion of businesses at risk of disappearing by business size group 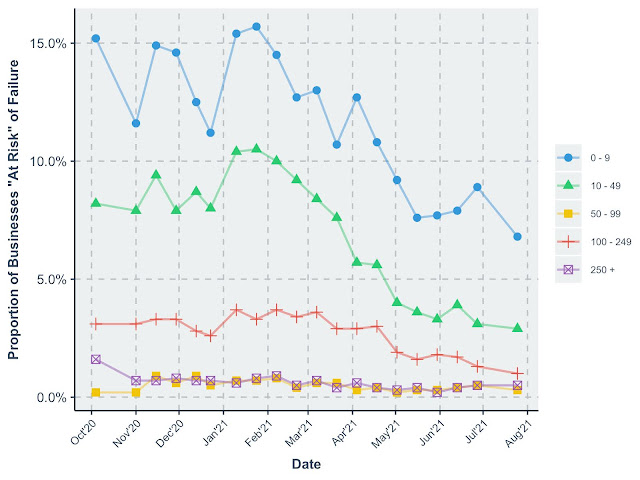 Note: See note in Figure 1. Responses within each size bracket are weighted to make responses representative, based on the Interdepartmental Business Register.

What led to the improvement in expected survival? We cannot know for sure what caused the improvement in confidence. Nonetheless, we focus on three possible causes: the easing of containment restrictions, the heavy reliance on vaccinations, and the (related) reduction in deaths from COVID-19.

Unlike the many rapid policy changes in 2020 (including the sudden strict imposition of local lockdowns just before Christmas), 2021 has been more stable with a gradual easing of restrictions implemented. The government’s “roadmap”, published at the end of February 2021, provided for a gradual reduction in the stringency of the measures imposed on businesses and households. In addition, this provision for easing restrictions was largely rolled out as planned.

Figure 3 below shows how the subsequent transitions from the start of a third nationwide lockdown on January 6 through the so-called “Freedom Day” on July 19, alongside the decline in the number of businesses “ at risk “. 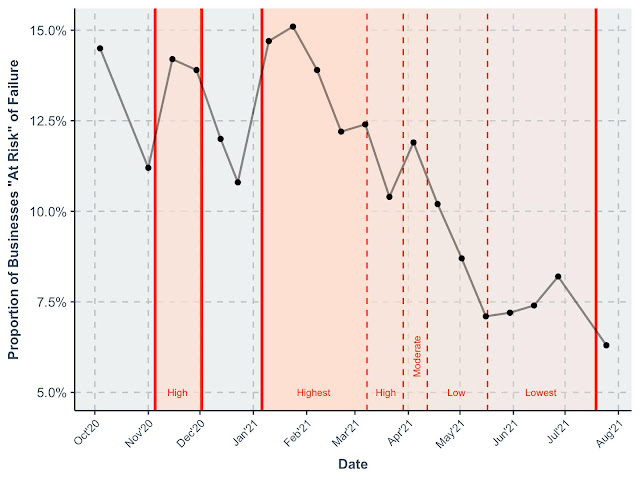 Note: The timing of restriction data was obtained from various online sources.

The second notable trend that coincides with the declining risk of self-reported failure by companies is the uptake of COVID vaccines in the UK. Figure 4 below shows how the proportion of people vaccinated has increased sharply (first and second doses) during the period when companies at risk of exit have steadily declined. 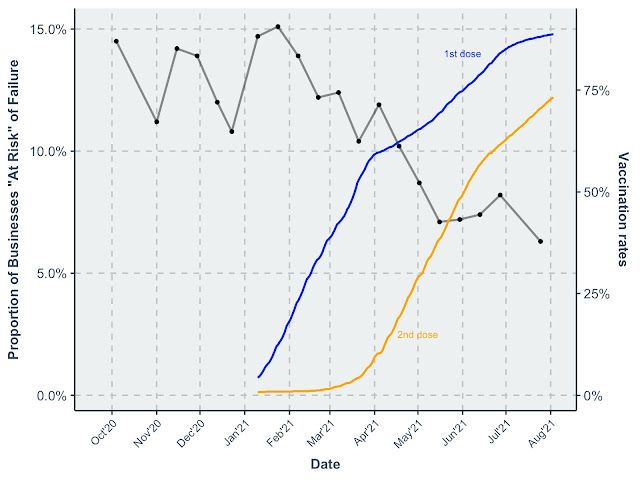 Note: See the note in Figure 1 for a discussion of the number of “at risk” businesses. Vaccination rate refers to the proportion of vaccinated UK citizens aged 18 or over. Single dose vaccines have been counted as both the first and second dose for consistency. Data from gov.uk. 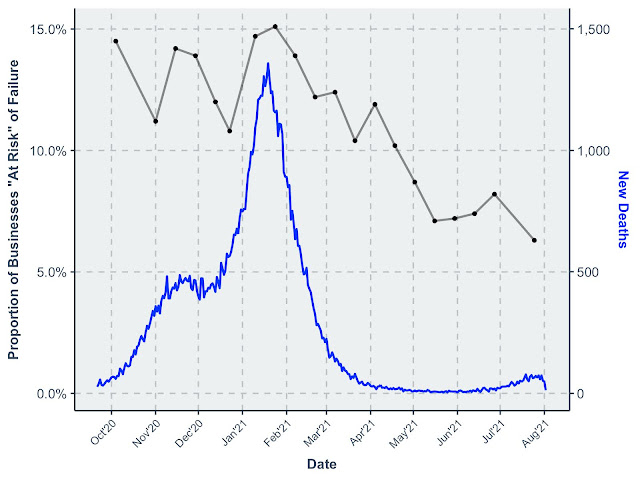 Note: See the note in Figure 1 for a discussion of the number of “at risk” businesses. The number of new deaths was compiled on 08/04/2021, from here. This includes deaths up to 28 days after registration of a new infection.

Are we out of the woods? The significant drop in the vulnerability of businesses is very good news. But this data also shows that when changes in COVID policies are made abruptly or threats arise, such as new variants, things can quickly turn around. For example, Figure 1 shows a slight increase in the risk of self-reported failure in May and June. This coincided with growing concerns about the Delta variant as well as the delays announced in the so-called “Freedom Day”.

In the future, the gradual decrease in government support for workers on leave and subsidized loan programs could lead to further volatility in the number of businesses at risk of bankruptcy. Figure 6 shows the recent history of policy changes, extensions and current plans to end worker support entirely by October 1, 2021.

Figure 6. Changes in government support for workers on leave 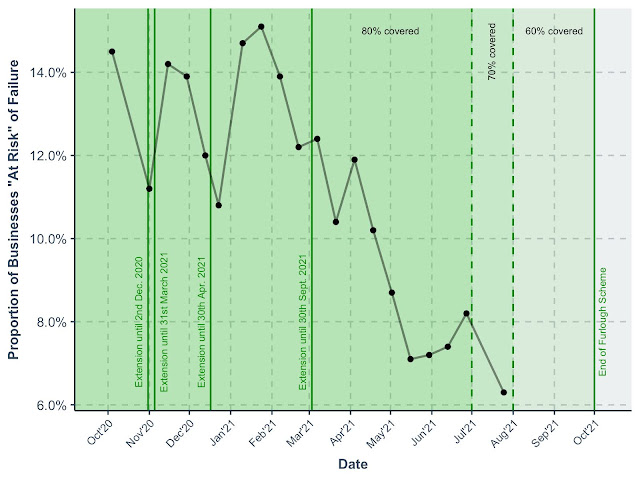 Note: See the note in Figure 1 for a discussion of the number of “at risk” businesses. Green lines represent changes (announced or actual) to the coronavirus job retention program.

The latest official figures from HMRC showed that 1.9 million jobs remained on full or partial leave at the end of June 2021. Even more recent survey data suggests a 31% drop in the number of workers on leave since the release of these HMRC figures. Data from the ONS BICS survey asks companies “In the past two weeks, roughly what proportion of your company’s workforce has been partially or totally on leave?” Responses collected up to June 27 indicated that 5.4% of workers were on leave. Responses collected on July 25, 2021 indicated that 3.7% of workers were on leave. The percentage change in these numbers is how we calculate that the number of workers on leave fell by 31% in July. While the end of the leave regime will have an impact on jobs and business closures, it should slow rather than reverse the recovery in business confidence.

Withdrawal of government support, possible new variants, and the ever-present risk of localized spikes in infections could make the rest of 2021 a fairly volatile time. Nonetheless, the UK is in a much stronger position both economically and epidemiologically today than six months earlier.

Note: The above was first published as part of the Innovation and Diffusion Program Blog.

Pierre Lambert is completing his PhD in Economics at LSE, funded by the 2018 Commonwealth Scholarship Award. He also works at the Center for Economic Performance – Growth Research Program – as well as the Program on Innovation and Diffusion (POID).

Apolline Marion completed her Masters in Economics at LSE and is currently working as a researcher for the Program on Innovation and Diffusion (POID) and the Center for Economic Performance (CEP).

John Van Reenen is Professor Ronald Coase School at LSE and Gordon Y. Billiard Professor of Management and Economics at Massachusetts Institute of Technology, where he is jointly appointed to the Department of Economics and the MIT Sloan School of Management. He is also an associate in the growth research program at the Center for Economic Performance (CEP). He was made an Officer of the Order of the British Empire (OBE) and received the Yrjö Jahnsson Prize.

photo by Kai gradert to Unsplash.