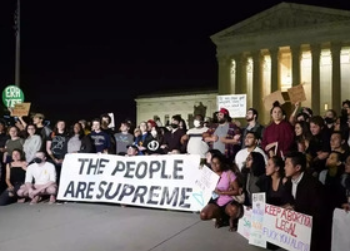 The Abortion Issue in America Has Serious Religious and Cultural Dimensions

Anguish and anger – these two words and their synonyms can be used to express the reactions of the majority of American women after “Politico”, a political journalism company, published an explosive leak of a draft majority opinion of the Supreme Court to overturn landmark decision on abortion. The draft was drafted by Judge Samuel Alito, a right-wing conservative member of the court. He was supported by four other judges, three of whom were appointed by Donald Trump.

Roe v Wade was a landmark legal decision handed down on January 22, 1973 in which the United States Supreme Court ruled that the 14th Amendment to the constitution protects the right and freedom of women to choose to have an abortion without undue government restrictions. .

The original lawsuit was filed on behalf of a pregnant woman named Norma McCorvey, pseudonym Jane Roe against a Texas anti-abortion statue. The State of Texas was represented by Dallas District Attorney Henry Wade. The case was therefore called Roe v Wade. Roe’s legal decision has not gone unchallenged since then. Conservatives have repeatedly tried to overturn the Roe decision. The Supreme Court has revised and reshaped Roe’s legality by adhering to the “Roiscore principle” in some key abortion rights cases such as “Planned parenthood v Casey” and “Whole woman’s Health v Hellerstedt”.

Ultimately, on May 2, 2022, in the case of ‘Dobbs v Jackson Women’s Health Organization'{against Mississippi state law banning abortion}, which is scheduled to be held by June 2022, the majority opinion of the Supreme Court goes against the Roe decision, which is clear from Justice Alito’s draft. He called the Roe Act unconstitutional and “referred the question of abortion to the representatives chosen by the people”, that is, to the state congress.

The Supreme Court’s draft leak was devastating, but not surprising.

Grassroots feminist organizations, especially led by women of color, Indigenous women, and other historically marginalized communities, have been warning us about this day for decades. The fallout from Roe’s overthrow will be the impending culmination of a decade of attacks on abortion rights. More than 20 states had laws that would restrict or ban abortion soon after the Supreme Court overturned Roe. All other red states will follow as soon as possible. One type of law, called a “trigger law”, is designed to take effect immediately. Women of color will primarily bear the brunt of new abortion restrictions. Blacks and Hispanics abort at higher rates than their peers. They also experience higher rates of poverty and will find it harder to travel to other states where abortion is legal.

The implication of canceling Roe will be enormous. Justice Alito’s draft says Roe was blatantly wrong because he is protecting a right that has not been definitively included in the text of the constitution and cannot be saved as a constitutional right”.

Simply put, the court’s pulling the thread on abortion rights threatens to unravel a web of rights that has been protected for decades. Conservatives, delighted with the success, will tackle same-sex marriage, LGBTQS+ rights and other liberal issues they despise; with the support of the Supreme Court held by predominantly conservative justices. Jurisprudence is highly polarized along party lines in America today.

Abortion is actually health care. Prohibiting or limiting access to abortion can have long-term negative health effects. According to a 2017 study, nearly one in four women in the United States will have an abortion at some point in their lives. A major study from the University of California found that women are harmed physically, emotionally and economically by being denied abortions. Texas, Florida, Arizona and many other red states have passed laws prohibiting abortion, even in cases of rape or medical emergencies, after 6 weeks of conception.

As an antidote to this trend in Republican-held states, some blue states [run by Democrats] are already taking steps to enshrine the right to abortion in state law, also providing abortion services to people who live in other states.

The fight for the right to abortion will upset American politics. Democrats have quickly turned to abortion as the winning political message in the upcoming congressional midterm elections in November. A recent opinion poll shows that 60% of Americans support the right to abortion, 30% against and others undecided. Making abortion the issue of the ballot box would allow Democrats to side with the majority that wants Roe v Wade intact. The issue is seen as a way to galvanize young voters whose recent disenchantment puts Democrats at risk of being wiped out in Congress.

Democrats quickly introduced a bill in the Senate, seeking to retain abortion rights, but were unable to pass it because their own Senator Joe Manchin sided with Republicans. Vice President Kamala Harris walked up to reporters’ cameras after the failed vote and said ‘[This] makes it clear that a priority for anyone who cares about this issue — the priority should be electing pro-choice leaders — at the local, state, and federal levels. President Joe Biden tweeted a similar message, promising to fight for abortion rights. Although Biden’s approval rating is as low as 42% right now, Roe’s issue has created some ripple among voters, especially young people. Monmouth University’s polling institute says, “Abortion has climbed to the top of the list of issues voters deem important, suddenly ranking alongside the economy and ahead of other issues.”

When some small-scale anti-abortionists happily rallied to show their support for the Supreme Court’s draft ruling, a large crowd of protesters came to the Supreme Court last week to express their anger over the leaked draft ruling. Demonstrations erupted outside the homes of Supreme Court justices. Republicans argued that the protest threatened “mob rule,” but Democrats agreed with a “peaceful protest.” There were over 380 protest events in cities including big ones like Washington DC, New York, Los Angeles, Chicago, Boston. They hold signs and display slogans such as “Reproductive justice for all”, “We will not go back” and “My body, my choice”. “If it’s a fight they want, it’s a fight they’ll get,” said Rachael Carmona, director of the Women’s March, one of the groups that organized the protests they call “Let’s banish our bodies”. Dr. Tlaleng Mofakeng, the ‘United Nations special rapporteur on the right to health’, told ‘The Guardian’ that the United States should not abandon federal protection for abortion. “When abortion is illegal, women die. Forced motherhood is an enslavement of women,” he said.

One protester, Kim Feller, 73, said she had trouble sleeping after hearing the news on ‘Politico’. The image of her own illegal abortion many years ago, shrouded in secrecy and subterfuge, came to her mind; she woke up in the middle of the night, thinking about it in the morning, then headed to the Supreme Court to protest. “Damn” – said the semi-retired labor movement worker – “I did that in the 70s. Now I’m 70 and I’m still doing the same bloody fight”.

The fight ahead will see the floodgates open on a torrent of new feuds in a country already embroiled in a war for cultural hegemony. (API Service)

UW-EXTENSION: Some first aid for your mental health |