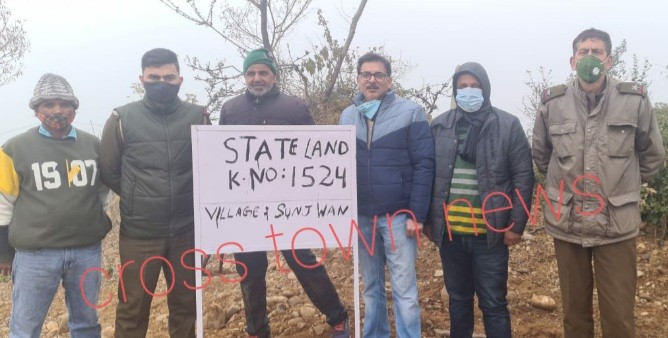 Jammu, 19th Jan: No doubt now a day the government is in action to reclaim the encroached state land but is not acting on the officers, who were involved in such issue and preferred to sleep and not did not act until daylight.

However, under the administrative control of Vijay Bidhuri, Dr. Raghav Langar and Anshul Garg, today a tax team under the control of Dr. Rohit Sharma, Tehsildar, Bahu has reclaimed state land measuring 235 kanal under Kh No 1524, Villa Sunjwan.

However, Dr. Rohit with his team of Mr. Salim, Naib Tehsildar and others till date in the last two years 1152 kanal falling at Vill Sunjwan and Chowadhi have been identified and recovered and offered for transfer to various departments.

Apart from these state lands transferred to the JDA at Vill Sunjwan, Doongian, Rakh Bahu, Channi Rama, which had been awaiting demarcation for more than 15 years, they were demarcated under the supervision of Dr. Rohit Sharma, Tehsildar, Bahu.