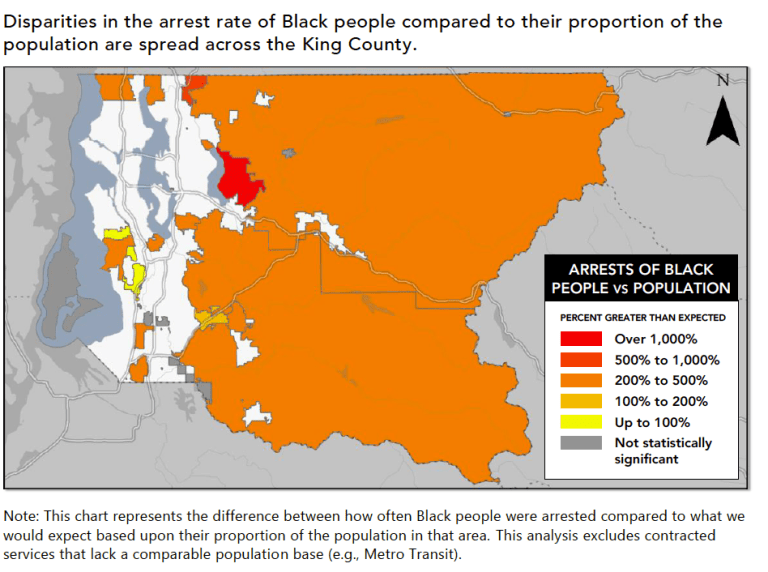 1. A new audit of the King County Sheriff’s Office found significant racial disparities in use of force, arrests and who becomes a ‘suspect’ in areas where the sheriff’s office is the primary enforcement agency of the law.

Residents and sheriff’s deputies “flagged black people as suspects, and officers arrested black people at rates nearly four times higher than expected given their proportion of the county’s population,” according to the report. audit.

Although county use-of-force data is limited — 619 calls resulted in a use-of-force between 2019 and 2021 — the audit found that “overall, white officers as a group used force twice as often as black or Asian officers. Additionally, blacks and Hispanics were subjected to use of force more often than whites. »

As the graph above shows, there were also significant disparities in arrests – in particular, black people were three and a half times more likely to be arrested than their proportion of the population would predict. In some areas, such as Sammamish and Woodinville, black people were arrested at a rate more than ten times disproportionate to their population.

After “monitoring” overall arrest rates between different racial groups, that gap more or less disappears, but it still illustrates major upstream disparities, senior management auditor Peter Heineccius told King County Council on Tuesday: Blacks, Browns, and Native Americans are much more likely than whites and Asians to become suspects (in part because people call the police more), and more likely to be arrested following a 911 call.

“It shows the risk that an analysis that controls for certain factors could explain racial disparities because it removes the analysis of how [people of] different races become suspects,” he said.

Another factor that makes it difficult to grasp the extent of racial disparities in stops and detentions: the sheriff’s office does not collect information about race during the vast majority of encounters with the public. According to the interpretation of the Ministry of a law intended to protect immigrants from ICE, the county council should change county law to allow officers to begin routinely recording the race of people they encounter.

Calling Tuesday’s council meeting, County Sheriff Patti Cole-Tindall said she “was heartened to see that even though the report indicated there were racial disparities, the amount of force we use, depending on the number of contracts was very, very minimal” – about 0.06% of all service calls are successful, according to the audit.

2. The city’s decision to refund approximately $5 million in parking fines and waive the equivalent of an additional $5 million in tickets isn’t the only issue parking officers have raised as they transition from Seattle Police Department to Seattle Department of Transportation. Parking attendants, who are considered “special police officers” by the SPD commission that was at the center of the parking ticket problem, want to retain access to the Criminal Justice Information System, a system that allows police to check the background of vehicle owners, by radio, before stopping.

Now, the union that represents parking enforcement officers, the Seattle Parking Enforcement Officers Guild (SPEOG), has filed an unfair labor practice lawsuit against the city for stripping them of access to CJIS without negotiating changes with the union. The CJIS is only accessible to law enforcement officers; the State’s Public Employment Relations Commission is currently reviewing their application.

“We still have access to the radio, it’s just that the information is not the same as when we were in the SPD,” said SPEOG chairwoman Chrisanne Sapp. “We’re able to read between the lines, but with all the work we do, I don’t find reading between the lines an acceptable response.”

PERC hearings are not public; however, city officials have argued that parking enforcement officers can still call out plates and know whether to avoid a parked vehicle, even without access to the information system.

2. The recent removal of a small camp of a park near the West Seattle golf course illustrates the problem with the city’s approach to mopping up, according to Keith Hughes, a neighbor who runs a day center in the nearby American Legion Hall: Homeless or meaningful services, people just keep coming back.

The five people who lived at Totem Pole Park a week ago returned to the area within three days, according to Hughes, including a couple who temporarily moved their tent to another location and three single men who stayed a few nights in a large shelter downtown. and returned to West Seattle a few days after leaving. One of the men later physically attacked Hughes, he said, punching the 74-year-old in the face and leaving him with a droopy eye, a large cut and bruises on his left shoulder.

“These guys aren’t mentally stable — the reason they’re in West Seattle in the first place is they don’t handle crowds well,” Hughes said. “And so the city picks them up in their sweeps and takes them downtown to a shelter for 100 people. … It’s pure fantasy when the city says it’s giving people a better temporary housing situation – no they don’t, they offer them a bed in a shelter as long as they stay there quietly and don’t bother anyone.

According to the city’s Department of Social Services, Team HOPE, which does outreach and offers shelter referrals to people living in encampments the city is about to sweep, “began engaging these sites on May 26 and visited several days before the withdrawal, providing shelter and connections to services. The spokesperson confirmed that the city made three referrals to shelters on the day the encampment was swept away.

Hughes said the other two men who returned to West Seattle are now sleeping under the VFW lobby awning after losing their tents and other belongings in the sweep. A spokeswoman for the Parks Department, which is in charge of encampment moves, said the department did not store anyone’s belongings from the encampment.

Hughes has called police about the man who assaulted him, but said in an email that he expects ‘nothing will be done to get him off the streets or any help for his mental state”.