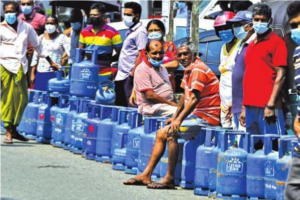 Savings measured by the length of queues

Sri Lankans don’t have time to work. About 62 percent of Sri Lankan workers are daily wage earners. The properties of some Members of Parliament were destroyed by mobs. Frustration has reached unprecedented heights – even the dark days of a 33-year-long civil war have not produced so much frustration among Sri Lankans, who are at their wit’s end.

People are asking President Gotabaya Rajapaksa to go home. Tourism – a $4.5 billion industry before Covid-19 – has been hit hard. Says the owner of a niche boutique hotel in Negombo, a well-known tourist resort close to Bandaranaike International Airport: “Sri Lanka is full of bad luck. Our industry was doing well and the euphoria of an elected government to fight corruption and increase transparency in 2015 saw our occupancy levels skyrocket. Things were looking up. The banks were happy to finance the expansion and we were happy. Now we are facing ruin. No government assistance except a moratorium on loan repayments. Two years later, the banks ask us to start repaying. We had the Easter bombings and then as we were coming out of it the Covid-19 hit. To deal with this, the government has gone all organic on culture. Our industry was barely able to produce US$100 million this year and government revenues have plummeted. Today my hotel is almost empty, bank interest rates are rising and the rupee has depreciated by more than 100%. It’s chaos.

On the campaign trail in 2019, Gotabaya Rajapaksa, a military-turned-bureaucrat widely credited with leading the armed forces to a landslide victory over the much-feared LTTE in 2009, promised to take Sri Lanka in a different direction. After his victory in the 2019 presidential elections, with 6.9 million votes, he proclaimed an immediate ban on imports of agrochemicals. The farmers were dismayed to know that a switch to organic farming would require their land to remain uncultivated for at least three years. They took to the streets across the country, fueling protests in urban areas, including Colombo.

It is claimed in some circles that President Gotabaya was informed that the financial situation in terms of foreign currency reserves made it impossible to spend up to $400 million on chemical fertilizers. The government implemented a bold plan to deceive the public about the real financial situation in the hope that funds could be collected later for the purchase of fertilizers and that crop declines during the Maha and Yala seasons would be manageable. . This misadventure plunged the Sri Lankan economy. Dwindling foreign exchange reserves were used to settle a sovereign bond payment of $500 million despite calls from opposition members to opt for debt rescheduling before the country defaulted.

No wonder the people are now calling for a government without the Rajapaksa family members. The entire Cabinet except Prime Minister Mahinda Rajapaksa had to resign en masse. The demonstrators were not satisfied with this response. They also wanted President Gotabaya to resign. One of President Rajapaksa’s confidants, Ali Sabry, was appointed finance minister but his visits to the IMF did not bring in the foreign currency needed to buy gasoline, diesel, kerosene, cooking gas and heavy fuel oil for electricity generation. India intervened immediately and Indonesia sent medicine. Immediate neighbours, including Bangladesh, have responded to Sri Lanka’s call for help.

Thanks to the ruthless treatment meted out to the Muslim community in the past, oil-rich West Asian countries have offered no help. Other nations were willing to send humanitarian aid but remain concerned about Sri Lanka’s failure to respond to allegations of war crimes, accountability, land restitution and reparations despite repeated almost yearly assurances to the contrary, the international perception and that of the Tamil community being that ‘nothing has been achieved.

The appointment of a prime minister who has served no less than five times before has been touted as a stopgap measure to defuse tensions. However, people are also demonstrating in front of his residence. A cultured man with a reputation for political survival, Ranil Wickremesinghe was immediately seen as a man brought in by lead puppeteer Basil Rajapaksa to create a “safe exit strategy”. It was interesting that there was no reference to an “honorable” release.

The attempt to introduce Wickremesinghe, who lost his own seat in the last general election but entered parliament via the national list through Sri Lanka’s original electoral laws – as a national consensus appointee to forge a broad alliance of all political parties, fell by the wayside when the leader of the opposition – another dynastic politician – Sajith Premadasa refused to be part of a government unless a deadline was set for the resignation of President Rajapaksa. Sri Lanka’s economy is in grave danger, with public debt standing at around US$32 billion (private sector debt at around US$18 billion) and foreign exchange inflows becoming scarce.

The IMF is still studying Sri Lanka’s proposals, just like its former colonial master, the United Kingdom, before deciding on aid. The Rajapaksa’s leaning towards China has been frowned upon by the West, and there is no doubt that there is international pressure – perhaps covertly – for President Rajapaksa to step down. The future looks uncertain not only for the Rajapaksa dynasty but also for the people, who are worried about an impending food crisis in August 2022, no matter who will be in power – the Rajapaksas, Wickremesinghe or whoever d ‘other.