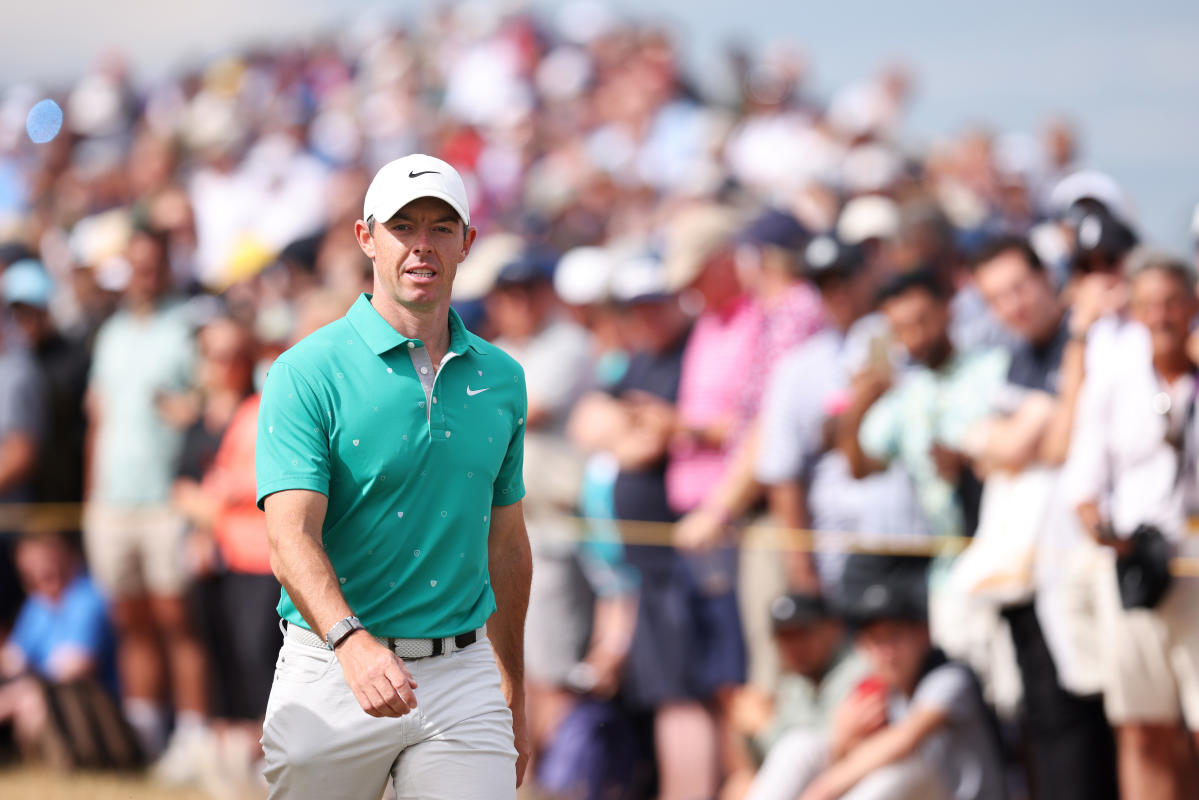 Seven years, eleven months, six days. It’s been how long since Rory McIlroy won a major, since leaving the 18th on August 10, 2014 as the winner of the PGA Championship. At the time, he was 25 and the future looked wide open and golden.

Now he is 33, and while his stature in the game remains unchallenged, the major drought has reached dramatic proportions. He’s become a backdoor top-10 master, playing well past the tournament decision – he’s averaged nearly two top-10s in the majors a year since that 2014 victory – but now, at last, he’s back again. in position to capture that elusive major fifth.

McIlroy and Viktor Hovland, tied at under 10 going into Saturday’s third round, had a brilliant duel in match play all day and finished the day tied for the lead at -16.

The leaders didn’t start until 4 p.m. local time, and in the hours before that, players lower in the standings enjoyed an uncharacteristically easy St. Andrews. Kevin Kisner scored the round of the day, a seven under 65, and plenty of other players played well under par to close in on the leaders.

Cam Smith, the 36-hole leader, didn’t have the same putt on Saturday that he showcased during the week, and went from a two-stroke lead to a four-stroke deficit. Playing partner Cameron Young also struggled, finishing a -1 round to finish at -12 on a day when standing still felt like stepping back.

McIlroy, meanwhile, looks fully in the moment, focused and connected in a way he hasn’t in the past eight years. Over the past two Big Saturdays, McIlroy has shot 74 in the PGA Championship (worst round of the week, by three shots) and 73 at the US Open (worst by four shots).

McIlroy tied for the lead with a highlighted eagle on the 10th, then took it away from Hovland with a birdie on the 14th. He dropped his first bogey of the day on the 17th, but immediately birdied the 18th for head to the clubhouse at -16.

“He’s one of the friendliest guys on Tour a mile from the country, so I think most players would be more than happy for him to win,” the defending US Open champion said. , Matt Fitzpatrick, who ended the day at -9. “Same for Viktor. He’s a great boy too.”

“They’re chanting his name there. I think he’s definitely a crowd favorite,” Scheffler said. “How can you not support Rory?” »

As the afternoon wore on, the chances of scoring diminished and bad decisions increased. Smith may have shattered his championship hopes on the vicious 13th hole with some curious shot decisions that ended up in the thick gorse around the green. He would go on to double bogey the holeshot and drop four shots from the lead.

Dustin Johnson, meanwhile, appeared to lose all contact around the greens on the back nine. He carded back-to-back bogeys on the 13th and 14th, and another on the 16th, to fall six shots behind McIlroy. He and his playing partner, defending Masters champion Scottie Scheffler, both struggled through the final holes and may have left a championship out of reach.

Further down the leaderboard, 2019 Open champion Shane Lowry pulled off an astonishing feat – back-to-back eagles at 9 and 10 that propelled him within four strokes of the lead. But seven horrible final holes – three bogeys, a birdie – left him at -7 and well out of reach of the leaders.

“To be honest, I’m so disappointed because I’ve worked so hard, and I’m working so hard to get into these positions, and I’m as disappointed as I have been in a long time,” Lowry said per the after. “(If) I shoot 1-under for the last seven holes (then) I’m very optimistic about my chances of going in (Sunday). Now I have no chance. It’s just very disappointing.”

Even so, Lowry still had enough in the tank to give Justin Thomas heartbreak. Thomas cold-hit his tee shot on Friday 18th, so Lowry pitted him and Thomas responded in kind. (Watch out for tender ears.)

Rain is expected overnight which could change the way the leaders attack the course on Sunday. But with many of the game’s best in position to win the Claret Jug, Sunday promises to be an exceptional way to end the men’s major season and a perfect way to wrap up the 150th Open Championship.