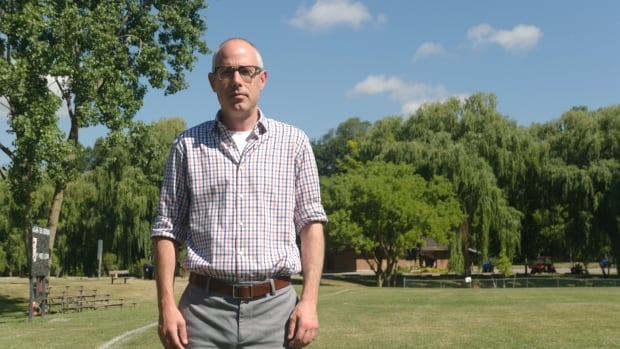 Reimagining the Elevated Portions of the Eglinton Crosstown West Extension, Residents and the City Tell Metrolinx

Resident groups in York South-Weston and the City of Toronto are asking Metrolinx to consider burying a section of the long-awaited Eglinton Crosstown West Extension to protect local green spaces.

The $4.7 billion project, slated for completion in 2030-31, will extend the Eglinton Crosstown light rail line 9.2 kilometers west along Eglinton Avenue West to Mississauga. The route should be mostly underground. But an elevated section is expected to run 1.5 miles between Scarlett Road and Jane Street stations.

It will affect parts of Pearen Park, Fergy Brown Park, as well as the surrounding urban forest, and Neiland Brissenden, a member of a group called Stop the Trains in Our Parks, says residents shouldn’t have to choose between expanding of public transport and park loss.

“This neighborhood needs that public transit — we’re a priority neighborhood. We need access to the jobs that this project will bring,” Brissenden said.

“But we don’t think that should come at the expense of our fantastic green space.”

Tunneling for the extension began in early April and later that month Metrolinx invited shortlisted builders to submit proposals to design and build the elevated section. But the Brissenden group and the Mount Dennis Community Association are calling on the agency to change course before it’s too late. And they’re not alone: ​​The City of Toronto has asked the provincial transit agency at least twice in recent months to consider making the elevated section underground.

But Metrolinx says the current design is the most cost-effective option and can bring the most passengers on board without the risks of digging a tunnel under the Humber River.

“The excavations for the Scarlett and Jane subway stations are expected to be about 30 meters deep, which is about as deep as a nine-story building,” Metrolinx spokeswoman Fannie Sunshine said.

She says the aboveground design will save commuters more travel time, has “the highest ridership potential” and will mean “easier and more reliable operations once the extension is in service.”

The tension between York South-Weston residents and Metrolinx is not unique, says Matti Siemiatycki, a professor of geography and planning who also directs the University of Toronto’s Infrastructure Institute.

But in reality, he says, underground transit is the most expensive to build and maintain, requires more energy than above-ground options to operate, and should only be used when large numbers of people are being transported. or that there is no other alternative.

“There is a fixed amount of money that we need to invest in public transit and to spread it out as much as possible, you have to think about the trade-offs,” Siemiatycki told CBC Toronto.

Metrolinx says the line will connect to five regional rail and bus services and have up to 10 stations – seven from Mount Dennis to Renforth Drive, and up to three more for a potential link between Renforth Drive and the international airport. Pearson.

Brissenden says that if the plan continues as is, not only will children have less incentive to use their parks during the eight years construction is expected to take, but endangered and threatened species found in the area, such as the little bat – myotis brown mouse, will be endangered.

That’s why he seeks the help of Michael Ford, the new MPP for York South-Weston.

Ford, who is also the new Minister of Citizenship and Multiculturalism and nephew of Premier Doug Ford, campaigned on the issue during the recent provincial election and said he would help local residents make their case to from Ontario Transportation Minister Caroline Mulroney.

“I will be a voice for my constituents at Queen’s Park and I will work with Metrolinx, Minister Mulroney and her team to get transit built for commuters and meet the needs of our community,” read a written statement to CBC News from Ford’s office.

Millions are due repayments on expensive credit cards and payday loans – are you owed cash?