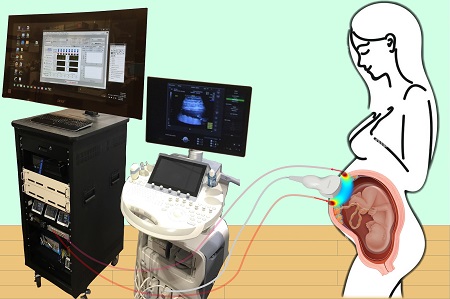 PHILADELPHIA, August 24, 2022 – An optical technique for measuring placental blood flow and oxygenation in real time provides information about placental hemodynamics that could aid in the early detection of adverse pregnancy outcomes. The technique is the result of a collaboration between the University of Pennsylvania and the Children’s Hospital of Philadelphia.

The multimodal instrument developed by the research team combines simultaneous diffuse optical spectroscopy in the frequency domain with ultrasound imaging. Image reconstruction algorithms are used to integrate sonographic information on the morphology of tissue layers with optical information on hemodynamics.

This information, when combined, is used to assess the properties of the placenta.

Researchers spent three years optimizing the design of the instrument and testing it in preclinical settings. The optimization process involved integrating fiber optics with ultrasound probes, exploring various ultrasound transducers, and improving multimodal technology to ensure that measurements were stable, accurate, and repeatable when collecting data at the bedside.

One of the main challenges was finding a way to reduce the background noise caused by light scattering as it travels through deep tissue to reach the placenta. The researchers ultimately reduced the background noise to ensure that the amount of light entering the placental tissue, although small, returned enough data for a high-quality measurement.

“We send a light signal that goes through the same deep tissues as ultrasound,” said Professor Arjun Yodh. “The extremely small amount of light that returns to the surface probe is then used to accurately assess tissue properties, which is only possible with very stable lasers, optics and detectors.”

The developed instrument can be used to noninvasively probe placental oxygen hemodynamics up to 4.2 cm below the surface of the body.

By combining optical measurements with ultrasound, an interdisciplinary team from the School of Arts and Sciences at the University of Pennsylvania and Perelman School of Medicine and Children’s Hospital of Philadelphia has developed a device to measure blood flow and oxygenation in the placenta. Courtesy of Lin Wang.

The results showed that the device could be used to study placental function in real time and also provided new insights into the relationship between blood flow and maternal vascular malperfusion, a condition that can occur when blood flow to the placenta is disturbed.

“Not only do we show that oxygen levels increase when you give oxygen to the mother, but when we analyze the data, both for clinical outcomes and pathology, patients with maternal vascular malperfusion don’t didn’t have as much of an increase in oxygen compared to patients with normal placentas,” said Professor Nadav Schwartz. “What was exciting was that not only did we get an instrument to probe deeper than commercial devices, but we also got an early signal that hyperoxygenation experiments can differentiate a healthy placenta from a diseased placenta.”

The team is also interested in using the instrument to study different regions of the placenta.

“From the instrumentation point of view, we want to make the operation more user-friendly, and then we want to conduct more clinical studies,” said researcher Lin Wang.

According to Schwartz, the greatest potential of this work is to provide a way to begin to answer clinical questions about the placenta that remain unanswered.

“Without being able to study the placenta directly, we rely on very indirect science,” Schwartz said. “It’s a tool that helps us study the underlying physiology of pregnancy so we can more strategically investigate interventions that can help support good pregnancy outcomes.”

EA and MLS announce the extension of their multi-year partnership