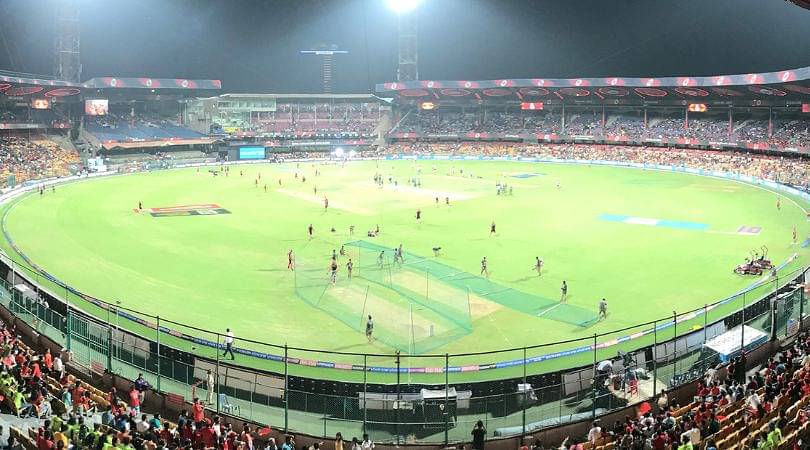 India will face South Africa in the 5th T20I of the 5 game T20I series at the M Chinnaswamy Stadium in Bengaluru. The Indian team lost the first two games, but they made a great comeback, and the series is now stabilized at 2-2.

The Indian team’s bowling unit looks outstanding right now, and the way Dinesh Karthik and Hardik Pandya are hitting is also outstanding. India’s Yuzvendra Chahal has played many IPL matches here, and he has scalped the most wickets on this ground in the T20Is.

M Chinnaswamy Stadium in Bengaluru is set to host the series decider between India and South Africa, and it is a stadium where all the batters in the world want to hit. Chinnaswamy Stadium is famous for high-scoring fixtures due to its flat terrain, and the boundary dimensions make it even more challenging for bowlers.

Although there are no defined parameters for the length of the boundaries in any cricket stadium in the world, the side boundary varies from 50 to 55 yards, while the front and back boundaries are around 60 to 65 meters. So, it is clear that this field is very small, and there will be absolutely no problem for batters to cross the fences of Chinnaswamy Stadium.

.@Avesh_6 scalped 4⃣ wickets and was our best player in the second innings of the fourth @Paytm #INDvSA T20I. 👏 👏 #TeamIndia

A summary of his performance 🔽 pic.twitter.com/4ExtPvIlTB

The high altitude of Bengaluru also allows the balloon to travel easily through the air. 202/6 is the highest T20I score recorded on this site by the Indian team against England, while the lowest score is recorded by Sri Lanka (122-9) against the West Indies.

The weather will also play a huge role in the fate of this game as rain is quite common in Bengaluru at this part of the year. In IPL, we have seen high scoring encounters in this same stadium, and we can expect the same in this game as well.