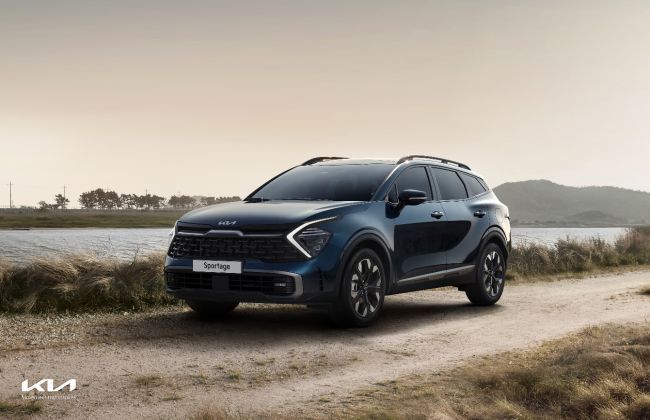 The Korean automaker has now revealed more information regarding the powertrain, dimensions and safety features of the upcoming fifth-generation Sportage SUV.

After revealing limited information about the Sportage midsize SUV a month ago, Kia has now revealed detailed specs about it. The biggest talking point is that the Sportage will be available in a hybrid avatar.

Kia has revealed that they will offer the option of both an HEV (Hybrid Electric Vehicle) and PHEV (Plug-in Hybrid Electric Vehicle). While both systems use a battery and some kind of electric propulsion system, the former uses the internal combustion engine and regenerative braking to recharge the batteries, while the latter can also use an external charging source to do so. .

More details have yet to be revealed. We do know, however, that Kia will also offer internal combustion engines as standard.

From now on, the petrol option will be a 1.6-liter turbo petrol engine producing 180 hp and 270 Nm. This engine can be fitted with a 6-speed manual transmission or a 7-speed DCT (automatic gearbox). double clutch).

Interior of the X-line model

The diesel supply will be a 2 liter unit which makes 186PS and 417Nm. This engine will be available with an 8-speed automatic transmission (torque converter). While these are the only powertrain numbers supplied by Kia, other powertrain options may also be revealed in the future. The Sportage will also get drive modes (Eco, City, Sport and Custom).

An AWD system will also be offered but we do not yet know what powertrains it will be offered with. Kia also offers adaptive suspension on the SUV. The system is able to control the damping of the shock absorbers in real time. Essentially, a system like this stiffens the suspension when the vehicle is driven vigorously and smooths it out when it detects potholes and rough road surfaces.

The Sportage will also be offered with Terrain mode. It can automatically detect the type of soil under the SUV (mud, sand and snow) and change its characteristics to provide the most traction possible.

The FCA warns of collisions before, before automatically applying the brakes. HDA uses features like Adaptive Cruise Control (ACC) and Lane Keeping Assist to maintain a constant distance from the vehicle in front and to keep the Sportage centered in its lane. NSCC uses navigation data and reduces speed if it detects a turn in the road or traffic ahead. The BCA warns the driver of vehicles in the blind spot when changing lanes, and the system also intervenes if it detects that an accident is imminent. The BCA also facilitates parallel parking. BVM adds to this by displaying a live video feed of the vehicle’s blind spot in the instrument cluster. Finally, there is RSPA (Remote Smart Parking Assist) which allows a driver to park the SUV or exit a parking space, remotely.

See also: Deals and discounts on cars in India

Apart from the above, the SUV will also sport Matrix LED headlights and LED DRLs. Buyers will be able to choose between 17, 18 and 19 inch alloy wheels, with a total of 7 different alloy wheels offered by Kia. Inside, the touchscreen system and instrument cluster are integrated into a single housing, although they both sport individual 12-inch screens. The whole setup is curved, allowing it to be more focused on the driver. The infotainment screen can be controlled by touch controls or via a controller in the center console. The Sportage will be available in the X-Line and GT-Line variants, with the main difference between the two being the design of the front bumper and the interior color scheme.

Kia has revealed that the Sportage is built on the N3 platform, which means it shares its foundations with the new Hyundai Tucson. We know that the next generation Tucson is expected to arrive in India in the future and we know that Kia is determined to bring SUVs to the Indian market. It makes sense then to assume that the Sportage will come to India in the future, however, we may have to wait a bit. It will go on sale in European markets in the coming months, and its plans for India are expected to be revealed once that happens. We’ve already made a story around the Sportage, detailing its exterior and interior. To check it, go here.

Over 100 Million Views of “The Chosen” Have Biblical Proportions