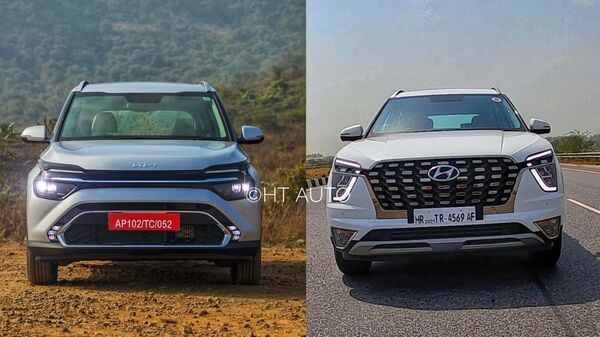 Kia Carens, once launched, will directly target Hyundai Alcazar. As the Alcazar begins towards ₹16.30 lakh, the price of Carens will be announced in February.

Kia Carens is set to hit Indian roads in February and the latest three-row vehicle is aimed directly at finding the fancy of customers who have large families and need a car that’s nimble in the city but also spacious for the highway. trips.

While three-row SUVs and MPVs under ₹20 lakhs has become a viable segment for many car brands, the sales figures are not exactly comparable to the mid-size SUV space. Not yet anyway. But that has hardly deterred equipment manufacturers from entering the field and the Carens, in this sense, makes great promises.

So how does the Kia Carens hold up against its Hyundai Alcazar cousin? Here is a simple comparison in terms of engine and transmission options, dimensions and features available on the two Korean models.

Koreans are sticking with diesel engines at a time when many others are adopting a gasoline-only strategy. Thus, the Kia Carens is offered with a 1.4 turbo petrol engine, a 1.5 petrol engine and a 1.5 diesel engine.

The Alcazar is offered with two engine options. There is a 2.0 liter MPi petrol engine and a 1.5 liter diesel engine. Both of these engines are mated to either a six-speed manual or AT options.

In terms of styling, Carens and Alcazar are a cross between SUV and MPV. But while the Alcazar looks more like an SUV, Carens leans distinctly towards MPV styling. Kia calls the Carens an RV or Recreational Vehicle.

In numerical terms, there is only a marginal difference in the exterior dimensions of the two vehicles. Carens is slightly longer, wider and taller, and with a very slight wheelbase advantage as well.

In terms of seating layout, both vehicles offer buyers the choice of choosing between six or seven seats.

In terms of style, while the Alcazar clearly seems to belong to the same family as the Creta, the same cannot be said for Carens and Seltos.

Koreans are known for packing their cars with features galore and the Carens and Alcazar both benefit immensely from a cabin that is loaded to the brim with convenience, comfort and safety additions.

Carens will be available in five variants – Premium, Prestige, Prestige Plus, Luxury and Luxury Plus. The top variant packs several highlights like a 10.25-inch main infotainment screen, wireless connectivity for Apple CarPlay and Android Auto, 64-color ambient lighting, air cleaner, digital driver display and a sunroof, among others.

The Alcazar also gets most of these features, but incorporates a larger sunroof, blind-spot detection power, and a second-row center armrest with wireless charger.

It might be a tight call when it comes to comfort and convenience features, but Carens offers more safety features as standard than the Hyundai. This includes six airbags, four-wheel disc brakes, TPMS, rear parking sensors and downhill brake control. It also offers several cabin color options.