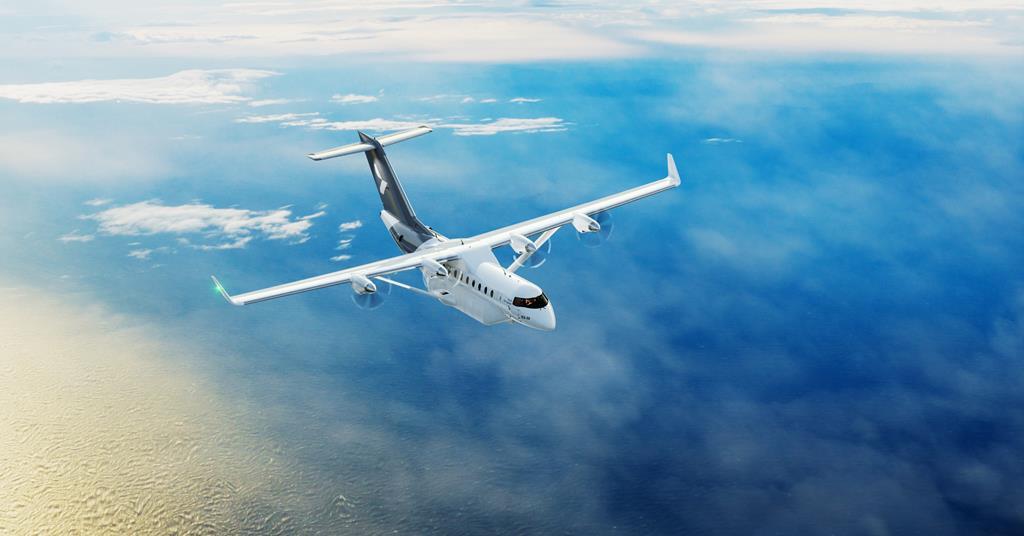 Heart Aerospace’s ES-30 will be more than twice as heavy as the previously proposed ES-19, with a wingspan that also increases by almost a third, according to the manufacturer’s preliminary data.

Unveiled on September 15 during a day in a hangar at Save Airport headquarters near Gothenburg, Sweden, the 30-seat ES-30 is a hybrid-electric regional jet that replaces the ES-19 from 19 passenger, whose development has now been discontinued.

The maximum take-off weight is now around 20 to 21 t, including 5 t of batteries, says marketing manager Claudio Camelier. However, he warns that the plane’s weight and dimensions could still change as it progresses through the design process.

“Once we made the decision to switch to CS-25, that limit ceased to apply; it allowed us to look at many other aspects of the aircraft to make it more applicable to airlines,” he says.

Much of this extra fuselage length is needed to accommodate a larger baggage compartment and a pair of 800 kW class turbogenerators, which extend the range to 216 nm (400 km), or 431 nm with 25 passengers on board.

Additional passenger space has been created by an enlarged fuselage, from 1.46m wide on the ES-19 to 2.21m on the ES-30, allowing for a 2+ configuration 1 seats versus 1+1 previously.

Although billed as a 30-seater, Heart also offers the ES-30 in a high-density 34-passenger configuration, with seats pitched 29 inches in the forward cabin and 30 inches in the rear. 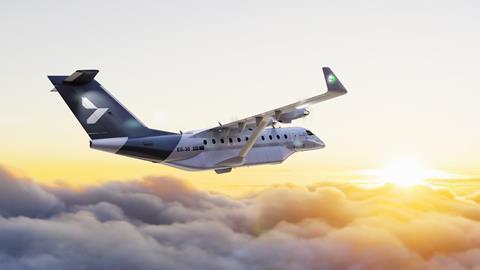 Other changes include the addition of a wing-fuselage brace and a large fairing under the fuselage which houses the batteries, rather than in the ES-19’s pods.

Camelier says the fuselage-wing brace was necessary because of the length of the “very high aspect ratio” wing, which, in return for its improved efficiency, “imposes challenges on the structural design”.

Heart has engaged several well-known suppliers such as Aernnova and Garmin in the program, but has not yet chosen suppliers for crucial components such as the battery or the 700 kW electric motors.

Although Heart worked on his own electric motor, it is unclear if these will be used on the final design; indeed, representatives from Magnix – including technical director Riona Armesmith – and Evolito were present at the hangar day.

Anders Forslund, Founder and Managing Director of Heart, says the company “committed to the market” for batteries and motors because “it’s a way of sharing our vision with these partners.”

Heart had collaborated with Italy’s Phase Motion Control on its motors and Forslund says “we would like to continue working with them”. However, he points out that no selection has been made, with the company looking to “make a very informed decision” which will be made “as soon as possible”.

Swedish company Saab was also recruited into the scheme, both as a supplier and investor in the Heart, paying $5 million for an undisclosed minority stake. 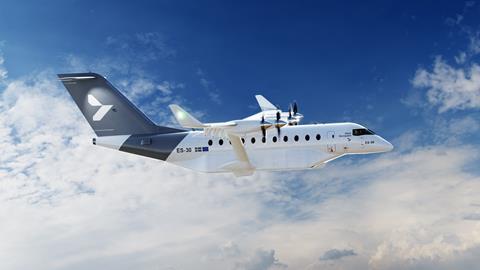 Sofia Graflund, Heart’s chief operating officer, said the couple have entered into a “partnership agreement” which will see them work together across multiple areas. This could see Saab, for example, provide consultancy services, advising Heart on its manufacturing setup or other aspects of the production or certification process.

The pact will also see the pair “collaborate on certain subsystems,” Graflund says, without providing details.

For its part, Saab says it “wants to be part of the sustainable future of aviation” and will lend its “expertise” to the program. “But we don’t go into the details of what we are going to provide them with,” he adds.

“We know the areas in part but we don’t want to disclose exactly.”

As a result of design changes, entry into service was pushed back from 2026 to 2028, and the list price of the ES-30 was also increased from that of the ES-19. “It’s obviously more expensive but it’s better evolved,” adds Forslund.

He points out that the design of the ES-30 will also allow the development of a stretched variant in the future.

“The ES-30 will also form the basis of a family of products and a platform whose fuselage we can extend for up to 50 passengers,” he said. Some “adjustments” to the wing will likely be needed for a 50-seater, he adds.

However, Forslund offers no timeline for the development of a larger variant; Heart’s efforts are currently focused on the ES-30, he points out.

Seahawks weaponize ‘Let’s Ride’ to send Russell Wilson to another…