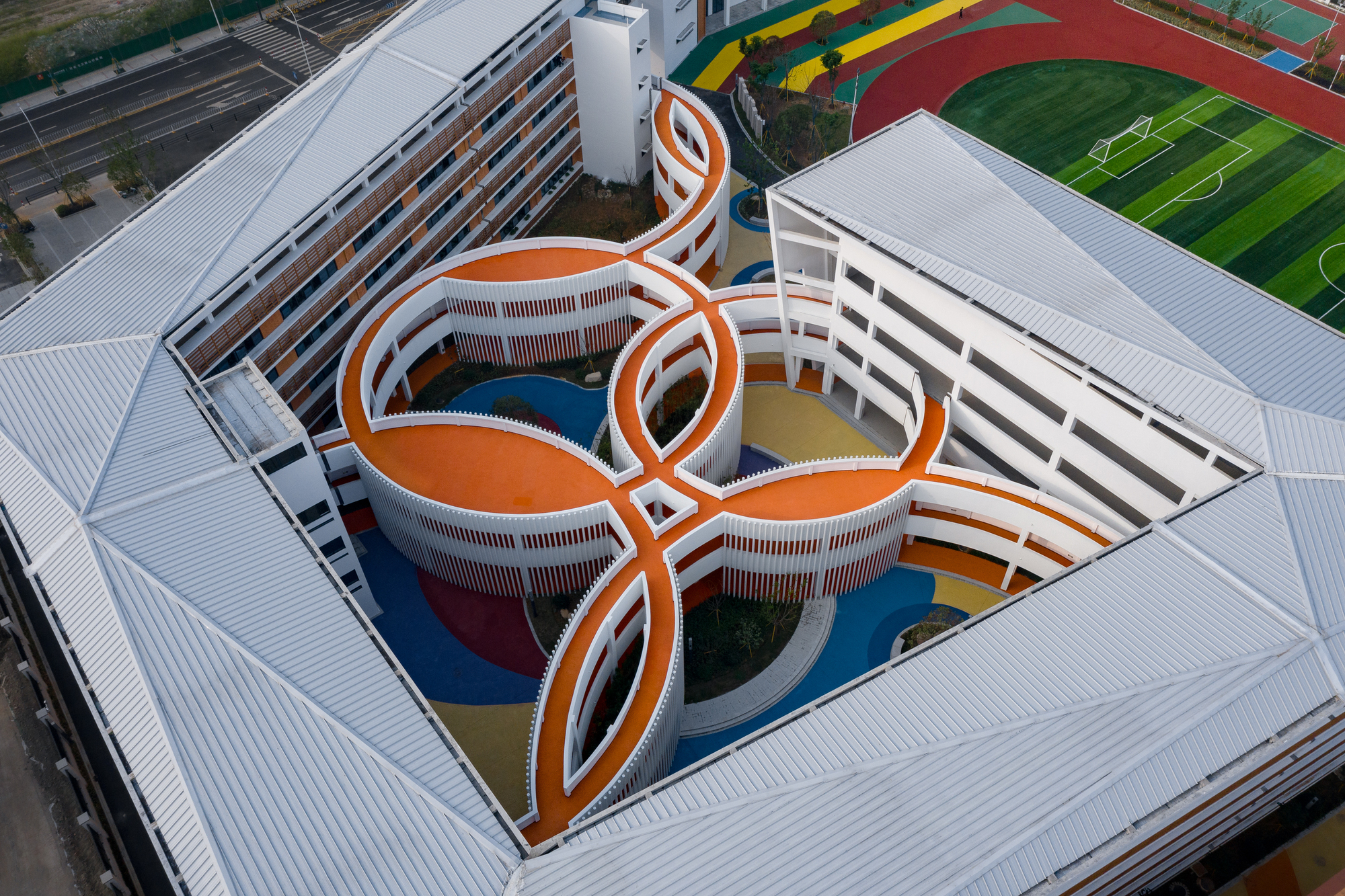 Text description provided by the architects. There is an insurmountable boundary between physical buildings and open space in a high density city. Under the principle of efficiency first, the use function often takes precedence over spatial interest and the two do not seem to achieve a symbiosis. The same goes for school buildings, where the economic use of land is strictly regulated, hence the similarity of the buildings. Once the fundamental teaching units and the auxiliary functions have been defined, the space of free activities can no longer form a complete and continuous expression. The site is divided by buildings, in which the scale of the public space contrasts sharply with the concentrated playground. The buildings have little uniqueness and a clear narrative; thus, it is easy to fall into a set of paradigms. On this basis, the school urgently needs new strategies to form new expressions and visions.

The site is located in a new development area of ​​the city, surrounded by high density housing and large-scale urban infrastructure. Instead of using the traditional campus layout, buildings with different functions were seen as a comprehensive element. The periphery of the site was closed and the middle was open. By extending the buildings with the site and roads and shaping them with continuous broken lines, relatively independent courtyards were closed.

This corresponded to the city scale with all the mass and divided the site into open sports areas and in progress closed. Multiple school functions were integrated into a continuous linear volume, and horizontally extended continuous visual spaces were formed on both the interior and exterior sides, allowing the school distinctive identification and generative logic. The main entrance was to the south of the site and the traffic distribution area was divided by the slope of the main body. All masses have been placed on the site according to the interrelation of their functions, generating basic logic and composition, and the space pursues a new kind of bonding and shaping through dimensional transformation.

Horizontal dimension – Opening and closing. The continuous building is divided horizontally between the first floor, the middle part and the roof. In terms of functional organization, public education and auxiliary elements are deliberately placed on the first floor, standard teaching units are placed in the middle, and the roof connects all the continuous elements of the school. The first floor of the building is an open space for a civil service, which has different characteristics from the standard teaching units in the middle. In naturally enclosed buildings, multi-type and functional places are created on the first floor, establishing different interfaces to let architectural forms change in interesting ways as well. This horizontal division is an embodiment of the combination and use of buildings. The movement and rotation of forms form multiple types of public spaces for communication and activity between the different areas of the school. The courtyard cloisters, aerial stands and raised entrance seek to further pierce the traditional decentralized building.

Second, the roof, which was initially neglected and separated, has become the most iconic element of the school, creating a unique image of the school while accommodating more educational activities. Teaching and education occur autonomously in this change and communication. Openness and publicity flow naturally into the enclosed building, or unfold smoothly, or sink deep. Thanks to the intervention of public activities, buildings change accordingly, are born naturally and move with form.

Vertical dimension – Interlude and penetration. Between the courtyards closed by continuous buildings, a set of circular corridors are arranged to vertically extend the space for public activities originally concentrated on the first floor. The overlapping circular hallways make dramatic changes to buildings and courtyards. The original separation becomes a strong interpenetration due to the corridors. The courtyards are constructed with an alternation of scale and dimension rather than a traditional layout, creating a strong sense of pleasure.

The veranda in the courtyard is not only for the traffic link but also an important place of outdoor activity for the students, becoming a living element in the strict order. In addition to the practical and complete connection, the hallway naturally creates more layers in the yard. The circular corridor and the courtyard form a relative movement and an absolute change. Observation and communication from different dimensions vertically form a three-dimensional layer, eliminating people’s perception of a single external dimension. The behavior of all students could be better merged with the environment and the buildings, the boundaries are broken and the imagination is released.

Time dimension – Travel and stay. After entering the school, we walk along the buildings, accompanied by the change of time dimension. Whether it is the green trees that accompany it, the sun of the grid or the fluctuating roof, a compacted and zoomed rational space is formed and time is interrupted and resumed. The continuous current line is incorporated into the walking speed adjustment at different turn points, using variations to replace the traditional single layout. The reversal and alternation of buildings, combined with interlocking curves, each time become places for walking. These temporal patches connect the different spaces, making people meet and disperse in space. Multidimensional space creates more contingencies, which are essential memories of people. The learning process is the accumulation of memory, on the basis of which the capture of the unknown experience is carried out. This ever-evolving integration of architecture, space and light will provide students with a world of abundant perception and an interest in exploring and discovering the unknown.

Fengxi Primary School is a breakthrough in tradition. Thanks to the spectacular construction of the space, the change of different dimensions is achieved. The possibilities and interest of space are used to trigger daily contingencies, in which experience and perception are accumulated to learn and grow.