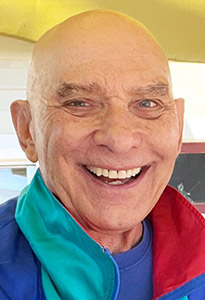 Domhoff’s new book deals with the developmental dimension of dreaming

When dream expert G. William (Bill) Domhoff—a distinguished professor emeritus and research professor at UC Santa Cruz—began to study dreams, he had no idea what lay ahead.

Domhoff began his career as a founding professor at UC Santa Cruz in 1965, after three years as an assistant professor of psychology at CSU Los Angeles. Now, nearly 62 years after he began studying dreams, Domhoff has developed an updated version of his neurocognitive dream theory and presented new empirical findings on dream content in his new book, The neurocognitive dream theory: where, how, when, what and why of dreams, published on October 4 by MIT Press.

The book – Domhoff’s fifth dream-focused book – takes a comprehensive look at the comprehensive use of neuroimaging findings in relation to spontaneous thought and dream content. Domhoff now believes that there are five distinct issues in terms of understanding dreams: neural substrates, cognitive processes, psychological significance of dream content, evolutionary adaptive functions, and historically invented cultural uses. Additionally, due to research conducted by others in the 1980s and 1990s, Domhoff points out that there is an important developmental dimension to dreaming: preschoolers do not dream often and their dreams are not very complex.

Dreaming, he says, is therefore a progressive cognitive realization.

Domhoff discussed his original dive into dream studies, changes over time, and major discoveries from the 1990s that led to his neurocognitive dream theory. His answers have been edited for length and clarity.

What initially sparked your interest in dream research and neuroimaging studies?

I started in the late 1950s, early 1960s, at a time when the relationship between rapid eye movement sleep – called REM sleep – and dreaming first came to the attention of the scientific community. . It was very exciting because eye movements during REM sleep seemed to be related to what people were dreaming. Eye movements and other changes during REM sleep, such as changes in EEG patterns, therefore provided a seemingly objective indicator of the dream; there seemed to be a perfect correlation between the dream and this particular stage of sleep.

But this discovery quickly proved to be wrong. People also dream during a “non-REM” sleep state within two hours of waking, called “NREM 2”. However, we have continued to make progress in understanding what we actually dream of through quantitative studies of dream content.

What makes a dream a dream?

Dreaming is defined in neurocognitive dream theory as an intensive and enhanced form of mind wandering and daydreaming, in which dreamers experience themselves in scenarios that almost always include other human beings and/or animals.

Additionally, other humans and animals usually interact with the dreamer through vivid sensory experiences which usually include sight and hearing. In fanciful terms, dreaming is a form of “embodied simulation.”

What did you find to be the main content of the dreams?

People most often dream about their personal concerns.

Whatever is happening in the daily environment, no matter how important, people still most often dream of family members and friends participating in social interactions. Dreams more often contain critical and aggressive interactions, as well as misfortunes, such as losing keys or making mistakes, than they include friendly interactions or good fortunes. Dreams have a negativity bias, which has also been shown to be the case in waking thought. In this sense, dreams are often the worst case scenarios.

How did you come to develop a neurocognitive theory of dreams?

Two unexpected but important discoveries in the 1990s led to a renewed interest in dreams. These two discoveries also led me to realize that it was possible to develop a neurocognitive theory of dreams.

The first of these discoveries was made possible by the development of functional neuroimaging. Functional neuroimaging studies of REM sleep have led to the surprising discovery that only certain parts of the brain are active when we dream. This came as a total surprise because everyone had assumed that the whole brain was activated during REM sleep.

At the same time, and completely independently, a large-scale study has shown that lesions in specific areas of the brain lead either to the loss of the dream or the loss of the visual dimension of the dream. I soon realized that all of the damage that led to dream loss occurred in the neural substrates activated during REM sleep, as well as in NREM 2 sleep in the hours before morning awakening.

Soon after, a very important discovery emerged from awake neuroimaging research. It turns out that the neural network that supports dreaming is part of the waking neural network – called the default network – that supports mind wandering, daydreaming and other imaginative thought forms during wakefulness when the executive and attentional networks are relatively deactivated.

The discovery of the default network made it possible to think of dreams as a form of spontaneous thought. Furthermore, it has also been found that drifting, waking thinking, and daydreaming, just like dreaming, often involve personal concerns. Thus, there was considerable continuity in the content of the dream and waking thought, even though the dream has many unique characteristics. Indeed, dreaming has finally found its way into a thriving area of ​​research in the burgeoning field of neurocognitive psychology.

How has your thinking about dreams changed since you started 62 years ago?

The dream and the content of the dream today seem very different from what the clinical theories of the first 60 years of the 20th century led us to believe.

We find very little or no evidence of symbolism in dreams, and there is far less emotion in everyday dreams than clinical theories suggest. Additionally, developmental and neuroimaging findings provide a basis for understanding at least some of the differences between dreaming and thinking in the waking state.

One of the key new concepts in my new book is that dreaming suffers from various cognitive deficiencies. I now think children have fewer and less complex dreams because they don’t yet have the cognitive abilities to express complex forms of thought. This view is consistent with findings in developmental psychology over the past 45 years, which show the progressive development of mental imagery, narrative thinking, imagination, and an autobiographical self.

These findings are consistent with the fact that young children do not regularly include themselves in dream scenarios until age 5–7, and that their dreams are not fully adult in complexity until age 9. at the age of 11. And it is between the ages of 9 and 11 that the default network also becomes almost adult. As for dream content, my recent research suggests that it is not adult in content until 13-15.