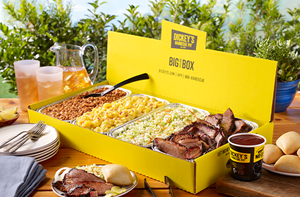 Dallas, Aug. 29, 2022 (GLOBE NEWSWIRE) — With summer winding down, there’s no better way to host one last Labor Day backyard barbecue — and avoid cooking and to clean up afterwards – than with the signature menu at Dickey’s Barbecue Pit. Celebrate Labor Day this year by treating yourself to the best barbecue in the country! With Labor Day being a 3-day weekend, there’s more time (and space) to enjoy Dickey’s Legit. Texas. Barbecue.

“The perfect end to summer is to spend Labor Day weekend with friends, family and Dickey’s Legit. Texas. Barbecue.™,” said Laura Rea Dickey, CEO of Dickey’s Barbecue Restaurants, Inc. “Our dining options provide a stress-free way to feed and engage any gathering. Dickey’s takes care of the delicious barbecue, and you can relax with your loved ones. Simply order your box online at Dickeys.com, and you’ll be ready to dive into smoked meats, sides and hickory wood sauces.

Dickey’s Barbecue Restaurants, Inc., the world’s largest barbecue concept, was founded in 1941 by the Dickey family. Over the past 80 years, Dickey’s Barbecue Pit has served millions of guests in 44 legitimate states. Texas. Barbecue.™ At Dickey’s, all of our grilled meats are smoked on-site in a hickory wood pit. Dickey’s proudly believes there is no shortcut to real BBQ and that’s why our name isn’t BBQ. The Dallas-based family barbecue franchise offers eight slow-smoked meats and 12 healthy sides with “No BS (Bad Stuff)” included. Dickey’s Barbecue has 550 locations in the United States and eight other countries.