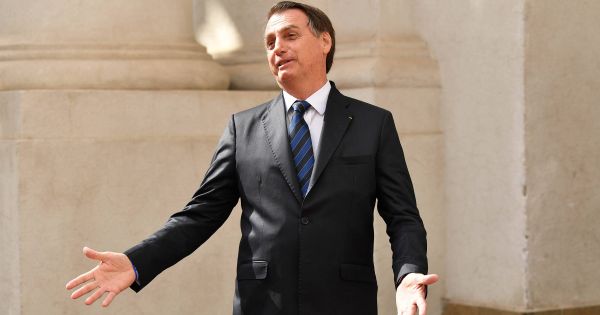 Brazilian President Jair Bolsonaro said on Friday that the Amazon desertification alert was “the same old nonsense” and blamed the opposition for the reports which were aimed at tarnishing the country’s image and scaring off investors.

Bolsonaro points out that the news about the allegedly irreversible destruction of the Amazon through increased deforestation and fires was false. He also insisted that it was propagated by opponents in search of political gain.

?? If the deforestation had the proportions they say, the Amazon would already be a desert, ?? declared the head of state on the return of the United Arab Emirates, Bahrain and Qatar.

There is illegal deforestation, but it is enough that other countries do not buy our wood, it is simple. There are also illegal burns, but not to the extent that they count. And we fight them. Some say “they must fight them more” … Do you know the size of the Amazon, how many countries in Europe can adapt to it ???

The president also downplayed alarming data on the alleged destruction of the world’s largest rainforest just a day after official data released by the Brazilian government showed that the Brazilian Amazon had lost 13,235 square kilometers of land cover between August 2020 and July 2021, the largest degraded area for twelve months in the last 15 years.

?? As we strive to bring a good image of Brazil abroad, terrible Brazilians come out to criticize the country, to tell lies about the Amazon, ?? Bolsonaro lamented.

The increase in deforestation over the period 2020-2021 calls into question Brazil’s promise to reverse this trend and eliminate illegal deforestation by 2028, as pledged at the Glasgow climate change conference , where a report argued that the Amazon is at a point of no return and may become a desert. ??

Bolsonaro claimed, â€œit’s the same old nonsense; this is news sponsored by Brazilians that works against the country, scares investments and generates many economic difficulties. ??

â€œSo far, I haven’t seen a Californian say California is on fire or a Chinese criticize their country for demanding pollution quarantines. I have never seen anyone say bad things about their country like the Brazilians do, ?? he added.

?? The sources of fire are always in one place and are usually caused by indigenous peoples, settlers and fishermen who grow subsistence crops and set the fire to prepare the land for new crops, ?? said Bolsonaro, who played down the fires caused by large landowners.

However, INPE data belies the president’s statements. According to the state agency, only last June, 2,305 fires were recorded in the Amazon, the highest number of the month since 2007.

According to the INPE, the most critical year was 2020, when a record 222,000 fires were recorded in the region.

No extension talks between Rangers and Ryan Strome yet