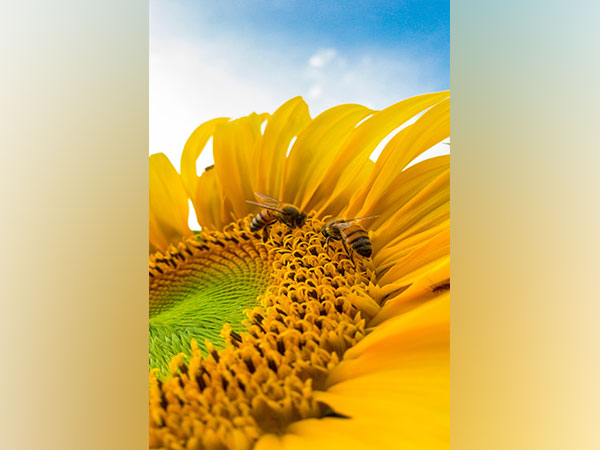 Bee health can be measured using DNA in honey: study

Vari (Athens) [Greece]May 29 (ANI): BSRC ‘Alexander Fleming’ in Greece has developed a method to analyze traces of DNA in honey, revealing the species with which bees interact.
The research results have been published in the journal “Molecular Ecology Resources”.
This collaborative work led by researcher Dr Solenn Patalano has made it possible to monitor the variability of bee diets throughout the year, to reveal the microbiota of bees in a non-invasive way, as well as to identify
pathogenic species with which they are confronted.
Why is understanding the ecological niche of the bee important?
What defines an organism’s ecological niche is a delicate balance of interactions and adjustments with other species coexisting in the same habitat. By pollinating trees and flowers, bees exploit a large number of species of flowering plants for their own food resources and growth.
On the other hand, bee colonies are also weakened when environmental conditions favor the spread of
pathogenic species, such as Varroa mites. The dynamics of species in the ecological niche of bees is therefore inextricably linked to the type of habitat in which bees live and its seasonal changes.
Faced with the increasing restructuring of agricultural areas and the effects of climate change, the ecological niches of bees are becoming more vulnerable. A better understanding of the dynamics of interactions between bees and surrounding species will make it possible to identify periods and areas at risk for bees.
“This is extremely important in rural and agricultural environments, where interactions between species influence the
crop productivity. It’s amazing how much our food and our survival depend on the proper functioning of tiny insects!” commented Anastasios Galanis, the first author of the study.

Honey, a unique marker of environmental plant diversity
Bees make honey by regurgitating nectar and pollen from the flowers they forage, then placing it in the cells of their hive until enough water evaporates. Through this process, honey comes into contact with a variety of organisms and therefore contains DNA from multiple species, collectively referred to as environmental DNA (eDNA); this comes from foraging plants, bee gut bacteria and potential hive pathogens.
The now published optimized method, called “direct metagenomics”, involves the sequencing and full identification of DNA fragments found in honey. As Galanis explains, “Designing and testing a bioinformatics pipeline tailored to honey metagenomics data allows us to increase sensitivity and specificity; thus, we can be quite confident in identifying certain species.” .
In this study, the researchers analyzed several samples of honey from an apiary located in a typical Mediterranean landscape. They identified more than 40 species of plants which reflect all the botanical diversity surrounding hives. “What was very striking,” said Dr. Patalano, “is to see how variable the abundance of eDNA in plants is across seasons, perfectly reflecting the foraging behavioral adaptations that follow the flowering of plants.
The researchers also compared the different honey samples using melissopalinology (using the shape of the pollen grains for characterization). Beyond the great complementarity of the two analyses, the study revealed that the metagenomic approach also reveals non-pollinic foraging behaviors, such as the foraging of pine honeydew, an important food resource for the survival of bees at the start of the fall.
Anticipating diseases and the spread of pathogens
Contrary to what one might think, the ecological niche of bees extends well beyond plants. In the honey samples analyzed, the researchers revealed an even greater number of bacterial DNA species, the vast majority of which emanate from microorganisms considered harmless and which constitute the central species of the bee microbiome.
Dr. Patalano explains: “As the human gut microbiome, the bee gut microbiome is an important part of their health. We already know that environmental stressors, such as pesticides, can severely damage gut microbial communities and increase the risk of bee diseases. But how it works remains largely unknown.” With this work, the researchers provide evidence that the metagenomic approach to honey allows the study of gut microbiome variation without having to sacrifice bees.
The researchers also looked for the presence of DNA from
suspected pathogens. They found that traces of Varroa mite eDNA in the honey corresponded directly to the observed contamination of the hive. This is a promising sign that this research could eventually be used to monitor and anticipate diseases and pathogens in large-scale studies.
“In the future, this work could also have very important implications for humans. If we want to provide ecosystem services, such as the pollination of fruits and vegetables, while maintaining the biodiversity of species, we must also preserve the health of bees. Our challenge is to build biomonitoring. strategies to identify the most appropriate ecological niches for all pollinators,” concluded Dr. Patalano. (ANI)