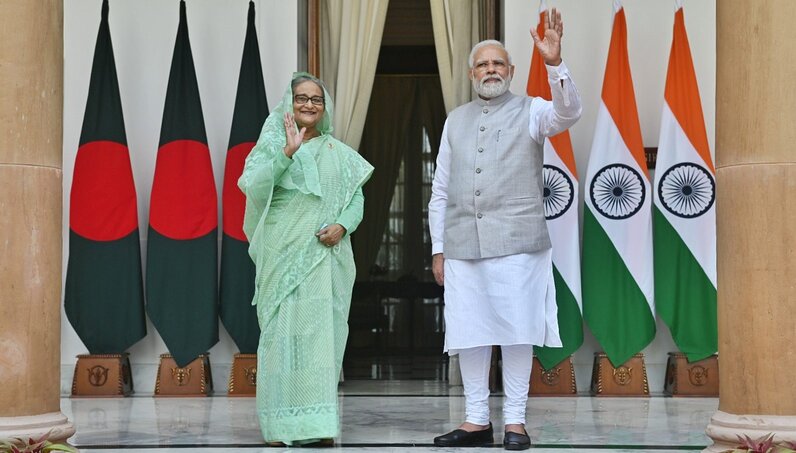 On September 5, India hosted one of the neighborhood’s closest friends, the Prime Minister of Bangladesh, Sheikh Hasina, who is in India for a four-day visit. During her trip, she held a bilateral meeting with Prime Minister Narendra Modi and interacted with President Draupadi Murmu. The immediate outcome of the visit was the signing of seven Memoranda of Understanding (MoU) in various areas including water abstraction from the transboundary Kushiyara River, cooperation in space technologies, collaboration on computer systems used by railways in such areas as freight movement, science and technology cooperation, training of Bangladeshi railway staff and Bangladeshi bailiffs in India, and broadcasting cooperation between Prasar Bharati and Bangladesh Television, aimed at strengthening ties between the two countries.

Among the seven pacts signed on September 6, a memorandum of understanding (MoU) on the withdrawal of 153 cusecs (cubic feet per second) of water from the Kushiyara by Bangladesh is very well received by Dhaka. It is the first such agreement the two countries signed after the Ganges Water Sharing Agreement in 1996 and is seen as a breakthrough in addressing an issue that has cast a shadow over their otherwise close ties. The deal has come to the Sylhet region as a blessing that should help alleviate some of Dhaka’s concerns. A pact to share the water resources of transboundary rivers that flow down the Himalayas from India to Bangladesh has long been a priority for Bangladesh, a lower riparian state that suffers from crippling water shortages. Previously, India and Bangladesh finalized the Teesta Water Sharing Agreement in 2010 and it was expected to be signed in 2011. But it could not be signed due to opposition from the Chief Minister of West Bengal Mamata Banarjee.

The agreement will benefit the southern parts of the state of Assam in India and the Sylhet region in Bangladesh. According to the agreement, the abstraction of 153 cusecs of water from the Kushiara River through the Rahimpur Canal will bring about major changes in dry season agriculture in the Jokiganj upazila bordering Bangladesh. At the same time, farmers in Kanighat and parts of Biyanibazar Upazila will benefit.

The two leaders engaged in talks on connectivity, trade, flood management, counter-terrorism, food security and nuclear energy partnerships. In a bid to help Bangladesh tackle the energy crisis, the two leaders unveiled the first unit of Maitree Thermal Power Plant, a 1,320 MW supercritical coal-fired thermal power plant at Rampal in Khulna Division of Bangladesh. The project is being set up at an approximate cost of $2 billion, including $1.6 billion in Indian development aid that will improve Bangladesh’s power generation capacity. Experts believe the Maitree Power Station will give the citizens of Bangladesh access to affordable electricity.

The two leaders also discussed the issue of the fight against terrorism. “Today we also emphasized cooperation against terrorism and fundamentalism. To keep the spirit of 1971 alive, it is also very necessary that we face together such forces, which want to attack our mutual trust,” Prime Minister Modi said. In the area of ​​flood management, India has extended the period of real-time sharing of flood water information, which will help Bangladesh deal with annual floods.

An important project that was inaugurated was the Rupsha Bridge. The 5.13 km long Rupsha Railway Bridge is a key component of the Khulna-Mongla Port 64.7 km wide single-track railway project, linking Mongla Port (the second largest port in Bangladesh) to Khulna by rail and then to the center and north. Bangladesh and also on the Indian border at Petrapole and Gede in West Bengal. “The inauguration of the railway bridge over the Rupsha River is a remarkable step towards improving connectivity. This bridge is an important part of the new railway line being constructed between Khulna and Mongla port under India’s line of credit,” Prime Minister Narendra Modi said in a statement during of a joint media appearance with Hasina.

An announcement was also made that India will supply road construction equipment and machinery in 25 lots to the Roads and Highways Department of the Government of Bangladesh. The Khulna-Darshana rail link project was also announced to upgrade the existing infrastructure (doubling the broad gauge), linking the current cross-border rail link at Gede-Darshana to Khulna and thereby increasing the rail links between the two countries, in particular for Dhaka, but also in the future, at the port of Mongla. The cost of the project is estimated at $312.48 million. Another project, the Parbatipur-Kaunia railway line, will see the conversion of the existing meter gauge line to double gauge line at an estimated cost of US$120.41 million. The project will connect to the existing cross-border railway at Birol (Bangladesh)-Radhikapur (West Bengal) and improve bilateral rail connectivity. The connectivity initiatives are part of ongoing projects in Bangladesh that aim to convert the country into a major connectivity hub of South and Southeast Asia.

It is worth mentioning that India has provided concessional loans worth $9.5 billion for development projects in Bangladesh, especially connectivity initiatives. These initiatives include improving rail connectivity between Khulna and Dhaka, Chilahati and Rajshahi and connecting Mongla port to Darshana-Gede at a cost of $312 million, Parbatipur-Kaunia rail project to facilitate fuel transportation which is under construction at a cost of 120 dollars. million, and the provision of road construction equipment and machinery worth $41 million to repair and maintain the country’s road network. With the expansion of connectivity between our two countries and the development of trade infrastructure at the border, the two economies will be able to connect more with each other.

It is true that while India is Bangladesh’s largest trading partner in South Asia, with bilateral trade reaching a record $18 billion in the last fiscal year, there is a significant trade imbalance between the two countries. To narrow the trade gap and further accelerate this growth, the two sides have agreed to begin negotiations on a Comprehensive Economic Partnership Agreement (CEPA) this year. When CEPA is operationalized, the bilateral trade potential would be $40 billion. Additionally, CEPA will boost the bilateral and sub-regional connectivity that Bangladesh champions in its policy initiatives.

During this trip, Prime Minister Hasina met with Indian industrialist Gautam Adani, who recently became the third richest person in the world, according to Bloomberg’s Billionaires Index. Adani Power, a subsidiary of the Adani Group, will supply electricity to Bangladesh from its upcoming 1,600 MW thermal power station in the Godda region of Jharkhand. The project is significant because Bangladesh has been recognized as an important partner under India’s ‘Neighborhood First’ policy.

Finally, it is observed that the cooperation during the visit extended to all areas, including trade and commerce, electricity and energy, transport and connectivity, science and technology, rivers and maritime affairs. The visit will serve as a catalyst for closer coordination and cooperation in resolving all issues, including the sharing of water from the River Teesta. It is also expected that Indo-Bangladesh relations will reach new heights and continue to add more depth and momentum in the coming days.

*Kamal Uddin Mazumder is a political economy analyst based in Dhaka, Bangladesh. The views and opinions expressed in this article are those of the author.