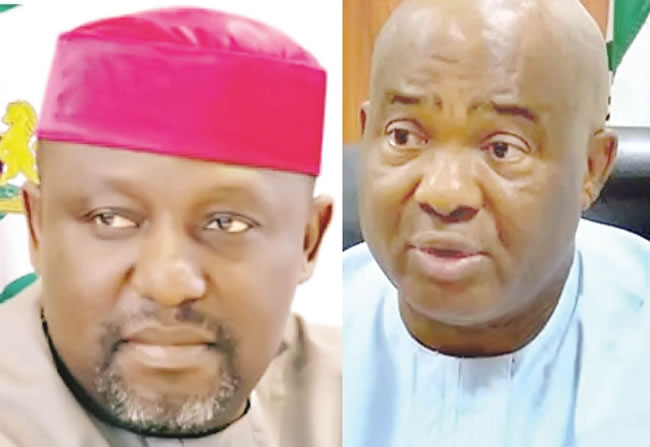 It wasn’t the first time this had happened. In fact, desecration of the cassock and the Holy Temple of God in Imo State is commonplace. In this article, JOHNKENNEDY UZOMA takes a look at the invasion of an Anglican Imo church on December 26, 2021 by armed police officers, who arrested Ugwumba Uche Nwosu, son-in-law of former governor Rochas Okorocha just outside the pulpit.

Imo State and the country as a whole were inundated on December 26, 2021 with news of the â€œkidnappingâ€ of the candidate for governor of the Action Alliance (AA) in the 2019 elections in the State of Imo. ‘Imo, Ugwumba Uche Nwosu, at St. St. Peter’s Anglican Church, Ezeama Obaire, Diocese of Orlu. The initial story that later leaked turned out to be an arrest made by police officers. However, state police commissioner Rabiu Hussaini, through command spokesperson Chief Police Commissioner (CSP) Michael Abatham, denied the kidnapping rumor but admitted that it was an arrest made by police officers.

The incident, which caused blackouts around the world, took place during a church service marking the funeral of the late Ezinne Jimaimah Nwosu, mother of Uche Nwosu. While the whole family was already in the church, including Nneoma Nkechu Okorocha, wife of Senator Okorocha and mother-in-law of Uche Nwosu, the clergy and other worshipers, gunmen in large numbers stormed. church and took the former MP Chief of Staff, Government House, Owerri and the former Land Commissioner, in their vehicles and drove off to an unknown destination.

The invasion abruptly ended the church service, given the bullying, panic and assault reportedly inflicted on priests, Uche Nwosu, his mother-in-law and other worshipers. It will be recalled that Uche Nwosu served the administration of former governor Rochas Okorocha before running for the post of governor of the state under the AA platform. Interestingly, the invasion of the church by security personnel, leading to Nwosu’s arrest, is the second time such an invasion has been recorded in the state.

Many people in society have wondered why the police were going to storm the church in such a commando style, to make an arrest. Among those who raised eyebrows during the invasion were the Archbishop of the Anglican province of Owerri, Bishop David Onuoha, including the head of the Catholic Church, who strongly condemned the action of the men in uniform, which, according to them, amounted to desecration of the universal church.

Observers welcomed government officials’ argument that the action was strictly police performing their duty with skepticism, accusing Governor Hope Uzodimma of being behind Uche Nwosu’s arrest.

At the head of the charges was the outgoing governor of Imo state and senator representing the senatorial district of Orlu, Okorocha, who felt that his successor and current governor, Hope Uzodimma, was the mastermind behind the arrest. Okorocha alleged that the police officers who arrested his son-in-law pushed his wife, (Okorocha) Nkechi, down and tore the clothes of his first daughter, Uloma, who is married to Nwosu. Okorocha further alleged that Governor Uzodimma deceived Inspector General of Police Usman Baba into desecrating the church by arresting Nwosu, just as he alleged that the state government wanted to trap Nwosu on account of the perceived â€œnon-performanceâ€ of the government. Okorocha said Uzodinma made no secret of his dislike for him and his family members and called on the governor to appoint the sponsors of the insecurity in the state.

However, Uzodimma made it clear that the government had no part in Nwosu’s arrest. Speaking through the State Commissioner for Information and Strategy ,. Mbadiwe Declan Emelumba, the governor accused Okorocha of trying to stir up feelings, advising him to wait until the law takes its course before reacting. He warned that any attempt by Okorocha to use Uche’s arrest to cause panic would be evidence of guilt. Uzodimma insisted that Okorocha contradicted himself when he alleged that the state police commissioner told him that the order was from the Inspector General of Police in one case and claimed that the arrest was ordered by the governor in another case.

The Boxing Day episode, according to most residents of the state, recalls a similar incident during the tenure of former Governor Ikedi Ohakim in the state, when he allegedly slapped a Catholic priest. Catholics and non-Catholics then stood up to condemn development. Then there was no remorse in the official quarters with some commissioners and other assistants accused of exploiting the incident to cause more havoc for the governor and his administration.

The fallout from the incident began to show during the 2011 governor’s election, when Ohakim sought a second term. The offer was not accepted as he lost to Okorocha in the ballot. According to some observers, the Catholic Church has followed the case from the moment it happened and it resulted in the failure of Ohakim’s reelection bid. The situation then changed the entire political landscape of the state, as other politicians took advantage of the incident against the former governor during the poll. Highlighting the Ohakim scenario and its aftermath, the Boxing Day scenario drew a number of posers among Imo political observers. Will the Boxing Day episode be a factor in the state’s upcoming election?

For Governor Uzodimma and Senator Okorocha, the incident of December 26, 2021 may have widened the rift between them and heightened tension and mistrust among their supporters and sympathizers, as well as further polarizing the state that is on the brink of has been going downhill for some time now. . According to some observers, although the government has apologized to the state’s Anglican Church for the incident, it is certain that the issue would remain on the minds of both gladiators and constitute a point of reference in the political landscape of the state.

They felt that the Okorocha camp could use the incident for political gain by putting that of Governor Uzodimma on the defensive. Since Okorocha stepped down in 2019, after serving his second term, an icy relationship has remained despite the duo belonging to the same APC political family. Nwosu was released after spending 24 hours in the hands of security personnel. However, the citizens of the state are anticipating how the scenario will play out in preparation for the next election in the state.