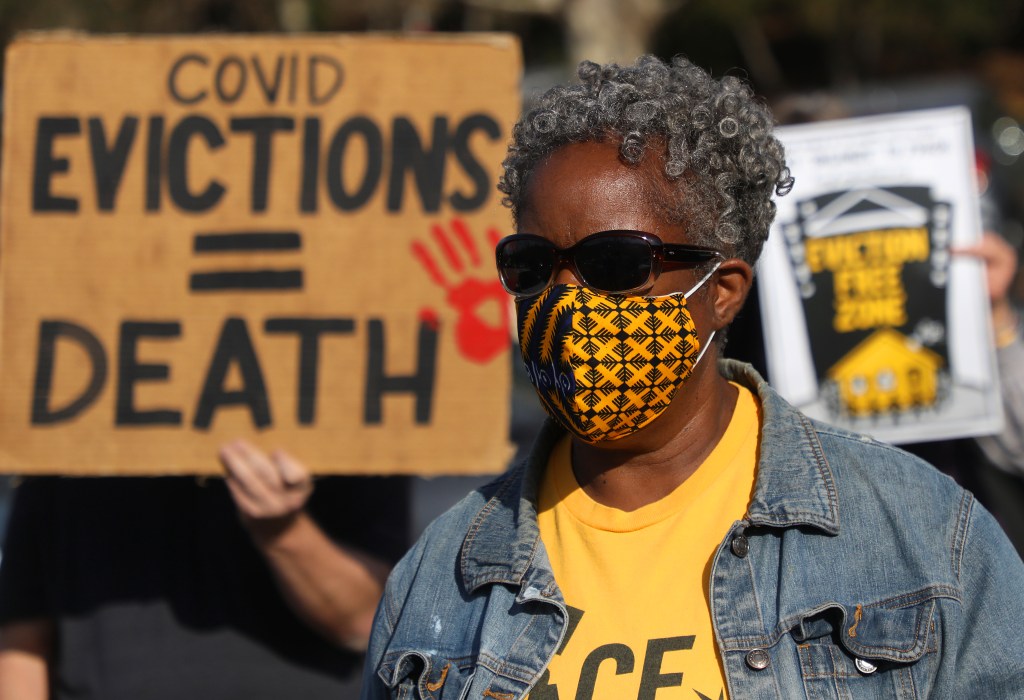 Advocates call for extension of California tenant protections and help

California’s emergency rental assistance program remains mired in delays, confusion and a lack of transparency, even as unemployment remains high in some industries, advocates say. They asked for an extension until August.

About 366,000 tenant families have applied for assistance and are waiting for the state to process their applications, said Francisco Duenas of Housing Now!, a statewide nonprofit tenant advocacy group.

Many renter families have waited months for answers, he said, and soon “are going to be at risk of losing their homes if the state doesn’t expand those eviction protections.”

State law designed to limit pandemic travel and protect public health generally prohibits landlords from initiating evictions based on unpaid rent if a tenant has requested assistance. But that protection ends next month and tenants who don’t pay April’s rent can be put on notice to pay or leave.

Housing advocates and landlords are bracing for calamity next month — a possible burst of evictions and continued uncertainty over when or if requests for help will be processed by the state. California’s unemployment rate was 5.8% in January, still above pre-COVID levels.

Governor Gavin Newsom and state lawmakers expanded protections three times during the COVID-19 pandemic, each time shortly before state laws expired. Lawmakers have not publicly announced plans for another expansion.

Landlord groups have fought the extensions, saying some tenants unaffected by the pandemic have taken advantage of the program. Small landlords are struggling to pay their mortgages and say they can’t keep tenants housed rent-free indefinitely.

“We have real horror stories,” said Krista Gulbransen, executive director of the Berkeley Rental Housing Coalition. Moratoria on local evictions in Alameda County and Oakland will remain in place when state protections end.

More and more small apartment owners in East Bay have decided to sell their properties rather than continue to fight for rent, she said. “Some recognize that the debt will never be paid,” she said.

The emergency rental assistance program, Housing is Key, launched in March 2021, with a combination of state and local programs distributing assistance to tenants affected by the health crisis.

More than half a million California renters and homeowners have applied for assistance from the state program in the past 12 months, requesting more than $6 billion to settle unpaid housing debts and far exceeding the allowance the fund’s initial $5.2 billion, according to state data.

An analysis by the National Equity Atlas found that half of program applicants are still waiting for a response. About a third of claimants said they had been threatened with deportation or given notice to leave. State housing officials say the review process is speeding up, but still requires documentation to ensure valid claims.

The program has distributed $2.4 billion so far. Housing officials have estimated a need for an additional $2.5 billion from the federal government, though their demands have brought in only a fraction of the amount. Officials say the program will pay all eligible debt on pending applications, but will stop accepting new applications on April 1.

Tenant advocates on Tuesday shared stories of harassment from landlords, confusion over requests for help and fears they could be evicted if they don’t pay rent in April.

Ramon Toscano, day laborer and father of six, lost his job at the start of the pandemic. Although he has returned to work, he said he still owes nine months’ rent for his apartment outside of San Diego.

His request for new aid was rejected because he had already received aid for rent and utilities, he said through an interpreter. Toscano urged state leaders to put themselves in his shoes as he faces deportation and the possibility of living with his family in a van. “The last two years have been very difficult,” he said.

Darris Young of the Bay Area Regional Health Inequities Initiative said the stress of housing insecurity has worsened the health of poor tenants. Black, Latino and Asian communities have been disproportionately affected by evictions and homelessness.

“Housing is a health issue,” he said, “as well as a moral issue.”