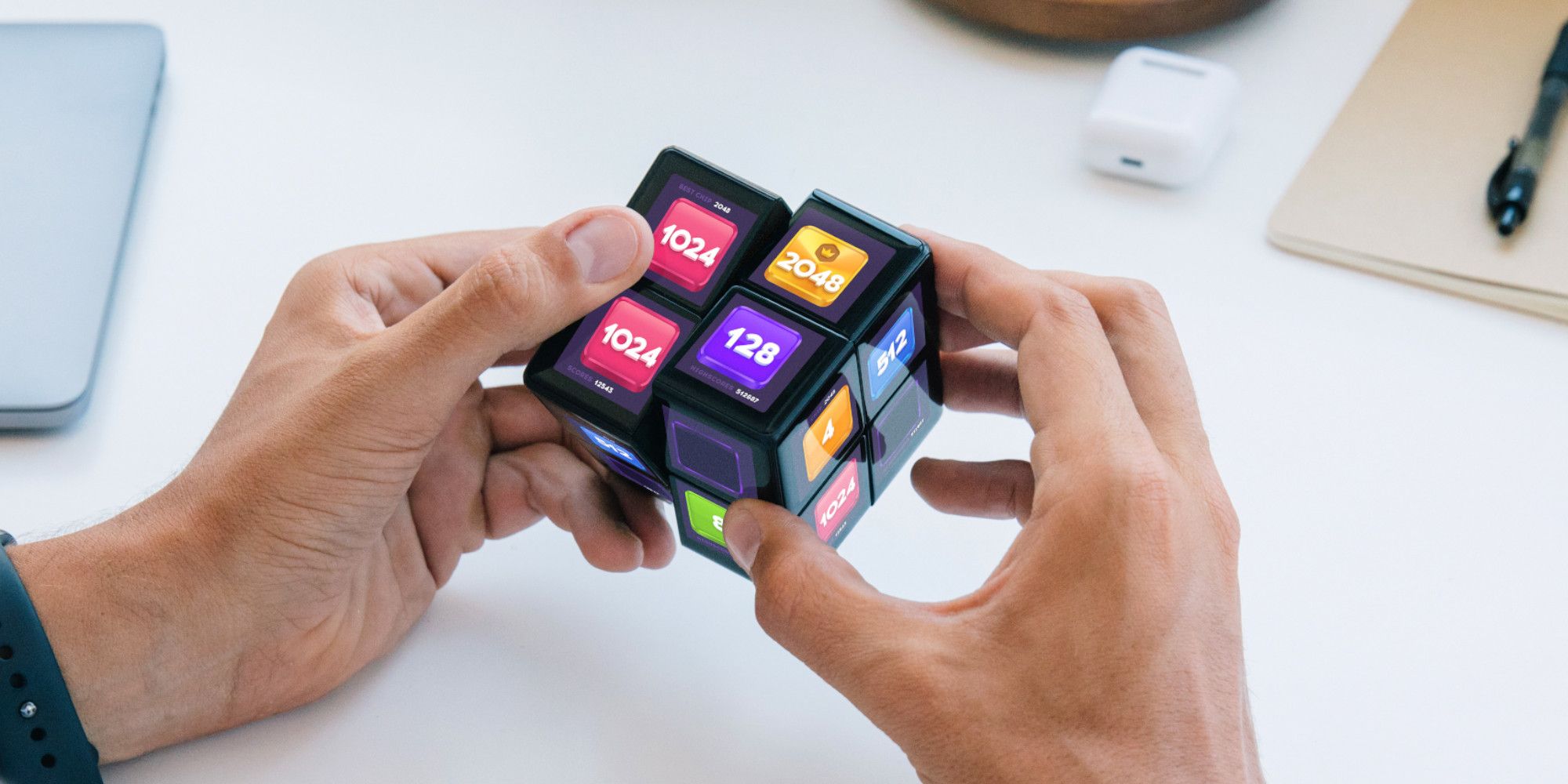 Imagine a glass Rubik’s Cube. It’s about twice as heavy as a normal one, and it only has four tiles on each side instead of nine. When you turn it, the screens of each of the 24 tiles come to life, revealing a three-dimensional suite of games and apps that are controlled with just a few simple gestures: tap, shake, tilt and twist. As intuitive as it is confusing, the WOWcube is a curious piece of technology that its creator hopes will have far-reaching applications, from gaming and productivity to early childhood development and STEM.

It may sound simple, but the technology that powers the WOWCube is anything but. As CubiOS CEO Max Filin explained to me on Zoom last week, it’s not possible to build a device with a single centralized processor that can twist and turn like WOWCube does. Instead, the cube is made up of eight individual modules, each with its own processors, batteries and displays, which connect with 144 neodymium magnetic beads, 96 of which permanently share low-voltage data between the modules. This is the true mechanical marvel of the WOWcube, which Filin demonstrates by dismantling a cube in front of me.

GAME VIDEO OF THE DAY

First, it launches one of the easier to understand WOWCubes games called Playball, where you use the cube’s internal gyroscope to roll a ball until it lands in a hole. Filin then took the cube apart and reattached the magnetic modules in random order, and miraculously the little ball was able to move back and forth across each screen. I barely understand how the technology works, but my mind was immediately blown away by all the possible uses for these tiny interactive computers. Filin describes his vision for a board game that uses each module as playing pieces, which can be attached together and separated to make units fight or interact.

Related: Resident Evil 4 Breaks All The Rules Of Virtual Reality

Regardless of that technology, for now CubiOS is focused on the WOWCube. The first thing you notice when you get your hands on the WOWCube is how amazing it is to twist. Each twist involves disconnecting and reconnecting dozens of tiny magnets, giving each twist a nice chunky haptic experience that clicks into place. You can flip and twist the cube quickly and it still feels accurate. It’s something Filin says is an important part of the design, just like Ernő Rubik when designing his cube. Filin says it took about ten different prototypes to achieve the tactile feel he wanted. It’s something you have to experience for yourself to understand, but sometimes I like to twist the cube like a fidgety toy without ever starting any of the games.

But games are what WOWCube is. What’s remarkable is how intuitive they are to play, despite the weirdness of the control mechanics. Most of them can be played without any tutorial. Although simple to understand, they are often difficult to achieve because your mind adapts to thinking about two-dimensional objects on a cube-shaped three-dimensional field.

One of my favorites is Ladybug, in which you’re tasked with guiding a ladybug along a path to eat berries. The ladybug automatically walks along the path, but if it hits a dead end, it’s game over. Your job is to find ways to reposition each segment of the path by twisting the cube so the ladybug never misses a path. It’s easy to lose track of the ever-moving ladybug as you turn the cube in your hands looking for ways to create new paths, and it’s a perfect demonstration of how the WOWCube turns simple concepts into complex and attractive tasks.

There are already plenty of games available on the WOWCube, including cubic versions of 2048, Cut the Rope, and Space Invaders, but Filin was quick to point out that most of the games were created by software developers and of hardware at CubiOS, not by game developers. Until recently, CubiOS had no professional game designers on the team. Bonbon, a variant of 2048 that swaps numbers for colored candies, was created by Filin’s eight-year-old daughter. One of the productivity apps, a simple timer, was designed by someone who works in HR. Filin sees WOWCube as a platform for hobby and professional developers alike to work in, and delivering the SDK to people will lead to games and apps beyond what even his team could have imagined. “You can’t believe the number of requests we have,” Filin says, “[of people saying] I want to make a game for you.

Beyond gaming, the WOWCube has a ton of potential as a smart device, productivity tool, and maybe even medical applications, like helping people with traumatic brain injuries recover. There’s a widget app, customizable from an iOS device via Bluetooth, which uses the 24 panels to relay information, such as weather, phone notifications, moon phases and stock prices. Filin says it will be able to connect to your social media accounts so it can post photos of your family, or connect to a phone to be used as a Bluetooth speaker. It has more applications in mind, like panoramic Google Streetview images stretched across cube faces, or esports athletes checking their WOWCubes for match times and rules during a tournament. Filin makes the possibilities of WOWCube seem endless.

The version of WOWCUbe I’ve been working with this month is a working model. When it ships to customers later this year (pre-orders are now available at a steep 40% discount) it will be twice as bright, 11.5 times stronger, and will charge more reliably – even though I I personally had no load problem, beyond the fragility of the fins which have to slide between the modules during docking. It’s quite a heavy device and the battery only lasts about an hour, but Filin says future iterations, including one that replaces the glass panels with plastic ones, should improve it.

As a novelty, there’s a lot to love about this odd little cube. Its puzzle games are great for a short distraction, and young children will love twisting and turning it, but the WOWCube’s effectiveness as a platform will depend on the kind of support it receives from developers. innovative. The technology is remarkable and full of potential, and I’m excited to see what game developers and app makers decide to do with it.

Development kits are available on demand and you can also register to pre-order. You can find out more about the WOWCube on the official websiteor on the CubiOS Start Engine page, where it is always recruiting new investors for the project.

Next: Virtual Reality MMORPG Zenith Is The Start Of Something Big

Eric Switzer is the Livestream News Editor for TheGamer as well as Head of Virtual Reality and Technology. He has written about comics and movies for Bloody Disgusting and VFXwire. He graduated from the University of Missouri – Columbia and the Vancouver Film School. Eric loves board games, fan conventions, new technology and his adorable kitties Bruce and Babs. Favorite games include Destiny 2, Kingdom Hearts, Super Metroid and Prey… but especially Prey. His favorite Pokémon is Umbreon.