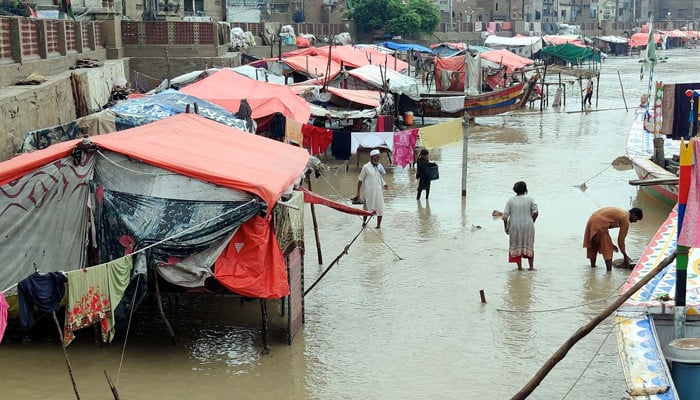 ISLAMABAD: Federal Minister for Climate Change, Senator Sherry Rehman, has stressed the need for immediate humanitarian and relief efforts to rehabilitate flood-damaged and affected populations across the country.

During a briefing on the current flood emergency in the country to reassess the damage caused by recurrent and unprecedented floods, the minister said that 830 people were killed, 1,348 were injured and thousands of people died. are found homeless amid torrential rains across the country.

From Balochistan, the monsoon system has moved to Sindh where 30 districts are under water. During the current monsoon, Sindh and Balochistan experienced rainfall 395% and 379% above average, she said.

It is a climatic catastrophe of epic scale, bringing in its wake the humanitarian crisis that may well match the scale of the great flood that was witnessed in 2010. At this point, both sides of the Indus are flooded in Sindh, which is the current epicenter of the disaster. Shelters are dangerously impacted in all 30 districts of Sindh, and even in Balochistan, and now the same type of speed and speed of water is experienced in southern Punjab. People are adrift, livestock and crops are damaged. This is a humanitarian disaster of unprecedented monsoon proportions, Sherry said.

Given the scale of the disaster, there is no question that the provinces or even Islamabad will be able to cope with this magnitude of the climate catastrophe alone. Lives are in danger, thousands homeless. It is important that international partners mobilize aid. The Indus is experiencing heavy flooding where a flow of over 600,000 cusecs is expected to cross the Guddu and then Sukkur dams on August 23-24, 2022 which will bring the entire Katcha region along the Indus under water , displacing thousands of families.

This is added to the current move. In terms of precious human lives, 216 lives were lost in the Sindh floods. An estimated 1,500,000 katcha houses were damaged and crops grown on 1,989,868 acres were completely destroyed in Sindh.

And with the new monsoon spell setting in, other parts of the country, especially DG Khan, will remain vulnerable to torrents from the hills. Emphasizing the need for urgent and immediate relief measures, Minister Rehman said: “The current climate catastrophe requires an immediate international and national mobilization of humanitarian efforts, not only in the form of food, shelter and survival equipment basic, but we need to amplify our rescue. efforts.”

The NDMA, the Pakistani army, as well as the provincial governments are relentlessly involved in the management of this climate crisis. But the lack of resources is a huge challenge. It is important to coordinate the needs of disaster areas and to triangulate with development partners and donors.