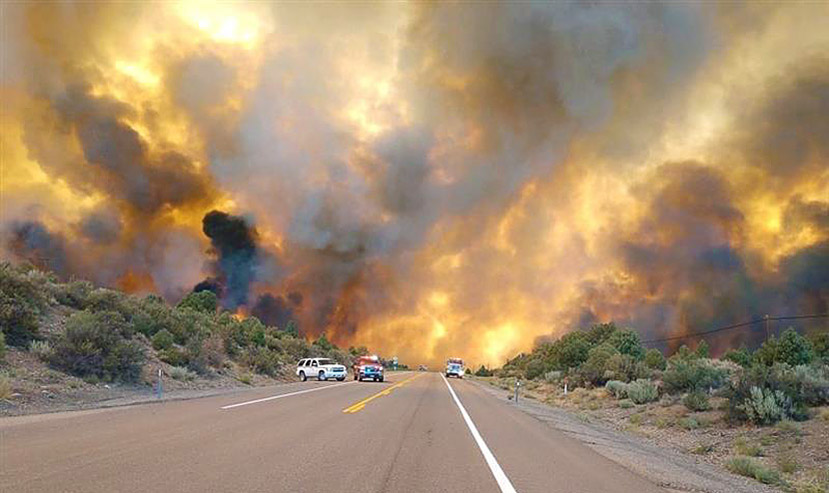 About 2,800 structures were damaged or destroyed in the Sierra Nevada, including most of the towns of Greenville and Grizzly Flats. In the southern Sierra Nevada, the Windy and KNP Complex fires have destroyed structures, threatened communities and killed thousands of giant sequoias. More than 3,500 giant sequoias in 27 different groves are to be feared. Combined with last year’s destructive wildfires, an estimated 20% of these ancient and iconic trees are dead.

Many of these fires are examples of megafires – large, intense fires that severely damage landscapes and the communities within them. Historically, these destructive fires have been quite rare in California and even more so in the Sierra Nevada.

In recent years, however, they have become all too common.

In 2021, the Dixie Fire became the largest wildfire in state history, burning nearly a million acres. Last year, the Dixie and Caldor fires also became the first known wildfires to ignite on the western slopes of the Sierra Nevada and burn on the high elevation rock ridge and east side.

These modern wildfires don’t just burn farther and faster; they burn with more intensity and severity.

Historically, fire swept through most parts of the Sierra Nevada every 20 years or so and burned with a mixture of fire effects. In these fires, most of the landscape experienced low and moderate severity fires, which removed small trees and brush and left large trees with less competition to thrive. Patches of high intensity fire would have been scattered throughout the burn footprint, leaving small open areas critical to habitat diversity and forest resiliency. This mixture is what many experts in the field call “good fire”.

However, in many parts of the Sierra Nevada it has been over 100 years since fire burned. This led to many small trees growing close together and lots of dead, dry wood on or near the ground. When fires burn through this type of forest structure, they burn hotter and more severely and create forests with unusually large landscapes of dead trees.

The 2020 wildfire season saw several megafires burning at unprecedented levels of high severity. Unfortunately, 2021 has been worse – over 575,000 acres of mixed coniferous forests in the Sierra Nevada have burned with great severity.

Last year’s fires include four individual high-severity “patches” that, at more than 62 square miles each, are significantly larger than the city of San Francisco. The high-severity burn landscapes created by modern Sierra Nevada fires are unlike anything seen in the historical record and are damaging rich ecological systems, as well as important natural resources such as source watersheds. and carbon reservoirs.

During the 2021 fire season, the Sierra Nevada experienced more than 18 times the average amount of high intensity fires compared to when the “good fire” regularly maintained the forests of the Sierra Nevada.

As large and destructive wildfires are on the rise, there is good news on California’s horizon. Forest management projects that include fuel reduction and prescribed burning, such as the Good Fire Project that protected the Caples watershed from the Caldor Fire, can not only provide ecological benefits, but have also proven that ‘they slowed down forest fires and drastically reduced the severity at which they burn.

California policymakers made an unprecedented $1.5 billion investment in Sierra Nevada wildfire resilience in 2021, which enabled the Sierra Nevada Conservancy to fund $19 million in resilience projects Early Action Wildfire Recovery and to announce another $25 million round of Wildfire Recovery and Forest Resilience Grants that is accepting proposals through January 31, 2022.

Governor Newsom supports California’s continued efforts. His January proposal for the budget for the fiscal year 2022-2023 includes $1.2 billion for resilient forests and landscapes, reforestation and fire recovery, forest firebreaks, community protection measures, forestry workforce and economic development, and more. Considering that the vast Sierra Nevada region stores over 50% of our state’s forest carbon and provides water to over 75% of Californians, not to mention the fact that it is home to hundreds of small town communities that offer unprecedented recreational opportunities, these resources are expected to help restore forests. and protect homes and structures at the interface between nature and urban areas.

The goal is not to eliminate wildfires, which is an important natural process in the Sierra Nevada, but to reverse the effects of generations of fire exclusion and, over time, make of the great destructive fires of recent years a rare in the Sierra Nevada.